With the falling temperatures and rising rains of autumn comes another unfortunate event.  Well, it’s unfortunate in the sense that it interrupts me from my otherwise regularly schedule internet time.  So that means it’s unfortunate for the regular updating of this blog, because I stop posting.

We’re in the middle of the third week now, and this is the first time I’ve really had the chance to sit down and get back to the story.  It’s all being sitting on the back burner up until now.  Which is oddly appropriate, given our current topic.

You’ll remember that when last we met, my first roast chicken had been liberated of meat.  The carcass itself I lowered into my gigantic gleaming aluminum pasta pot.  I added roughly chopped red onion chunks and quartered carrots.  Then I tossed in a liberal mix of herbs: thyme, sage, parsley, rosemary, dill, two or three bay leaves, and a small cupped handful of black peppercorns.  I finished by cracking a head of garlic and strewing several cloves, paper wrapped still, around the carcass.  I added probably twelve cups of water, and lidded the whole pot up to simmer for two and a half hours. 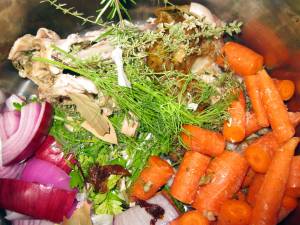 When I strained out the bones and wasted vegetables, I was able to pour ten cups of rich, buttery-colored stock into my largest Tupperware.  At Ina Garten’s helpful suggestion courtesy of the Food Network website, I stowed the container in the fridge overnight, and was rewarded the next morning by a thick layer of fat across the top of the broth, which I scooped off before portioning out the golden liquid into smaller amounts in freezable containers.  Though I will not use it for everyday applications that only call for a cup or half a cup of broth, now I will have homemade chicken broth for clear soups and risottos.  You can bet that if this roast chicken obsession continues, I will need to start saving every lidded container that goes through my kitchen.  Scrubbed and labeled, yogurt and cottage cheese containers alike will be homes to ice-crystalled, rock hard pints of lovingly simmered stock.  C’mon, winter cold, I dare you to take on my broth base.