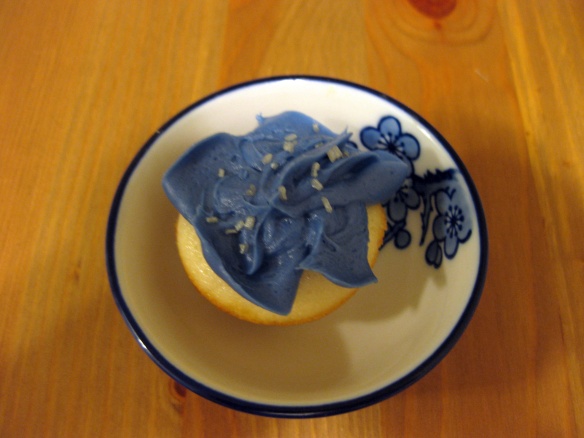 It’s funny, the things we feel we have to do to catch up with life.  Thursday was a big day: I successfully defended my dissertation, the last step on the way toward becoming a PhD in English literature.  So I guess I’m a doctor now, of a sort.  And now that the defense is over, and summer is (supposedly) on its way, I’m trying to find footing in the landslide of other responsibilities I’ve let slide: getting back in touch with friends, grading student work, cleaning up an office I’ll have to vacate in a month or so, and remembering (much to my dismay) an unwritten conference paper I have to present at the end of July.  And yet, rather than doing any of those things, the most important obligation I feel I must fulfill is this one: sharing how my most recent efforts on the cupcake front – now almost a month old – came out. 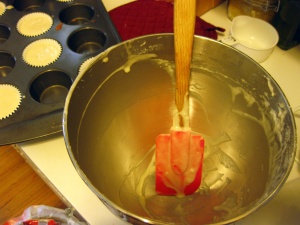 The answer is spectacular.  I think, barring any further requests or complaints from the bride and groom, I have hit on THE mixture we’ll be using for the wedding.  And of course, as always, I’ve learned some things too.

Last time I made a floaty, creamy filling that coated the tongue and whispered with sweetness.  This time, I wanted something tart – almost aggressive – to to cut through the sometimes overwhelming clouds of frosting.  I combined 1 bag each frozen raspberries and frozen peach chunks, 1-2 cups champagne, and about ¼ cup of sugar in a small pot, and simmered them together for 20-30 minutes.  I was hoping for a thickened, jam-like compote, but I think there was too much champagne for that, and the mixture stayed fairly loose.  The flavor was great, though – with such a small quantity of sugar, the tartness of the fruit and champagne made the mixture bright and assertive. 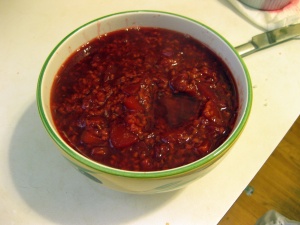 When the cupcakes were baked, and both they and this ruby mixture were completely cool, I cut the middles out of the full sized cupcakes and deposited a teaspoon or two of filling into each.  To my relief, despite being thin, the juice of the filling did not bleed through and stain the exterior of the cakes.  Bright red splotches on otherwise pristine ivory-white wedding cupcakes would be disastrous. 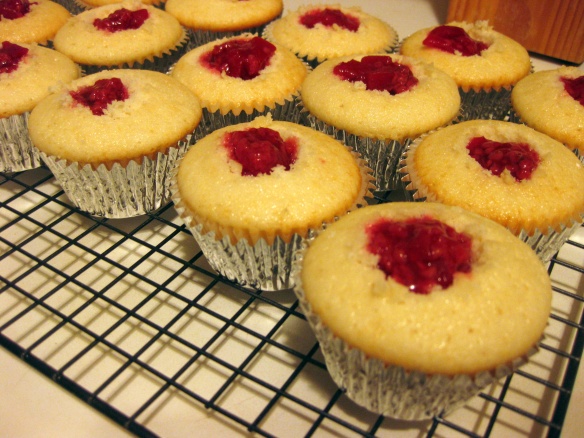 When I mixed up the frosting this time, my butter and mascarpone cheese were not as terrifically soft as they were in my last attempt.  Therefore, they creamed together without the fearful separation I wrote about previously.  The edges and ripples of the swirls were still not as rigid and fluted as they are on bakery cakes, but they were still okay.  And when I went to frost the mini cupcakes, I finally figured out what was going on.

I ran low on frosting as I approached the minis, and because I was now out of mascarpone cheese I plopped a half-softened half-stick of butter into my mixer and let it rip.  Immediately, even though I hadn’t upped the ratio of sugar in the mix, this frosting was different.  The flowers, which I’ll say more about in a minute, actually had fluted edges, and the frosting required more pressure to liberate from my piping bag.  Mascarpone cheese, even when it’s cold, is already softer than butter.  It is never going to result in the same consistency as pure buttercream because it is such a soft cheese.  So while it is fine for simple swirls or covering a cake, it is not great for detail work that requires sharp edges or fine points. 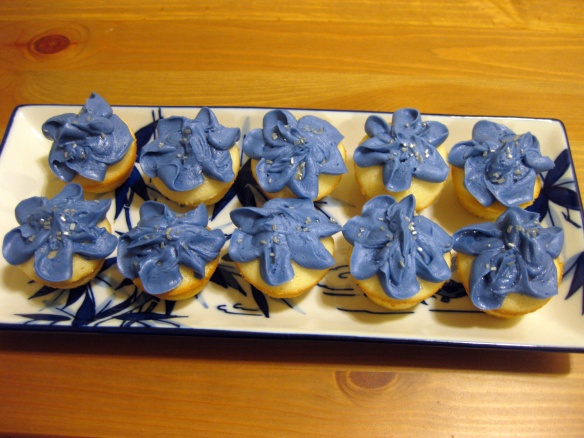 As you can see, these are the best flowers I’ve made so far, thanks mostly to the higher ratio of butter to mascarpone in the frosting.  I still wondered why mine did not seem to ripple out of the petal tip I was using the same way they do in the instructional video I’m using, until I remembered – what an epiphany – that I’m left handed.  If you turn a cupcake to the left while you hold the piping bag in your right hand, you probably need to turn the cupcake to the right if you’re going to hold the piping bag in your left hand.  I realized this minutes too late to apply it this time around, but now I know.  That way the icing will emerge from the piping bag in the same pattern as it would for a right handed person. 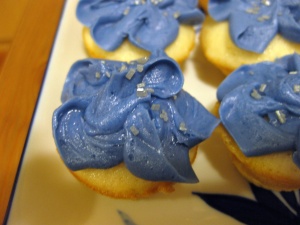 Survey said these were the best version I’d attempted yet by leaps and bounds.  The filling was perfect because it provided the right counterpoint to the achingly sweet frosting and the delicately sugary cake.  The flowers looked like flowers, and the blue sugar I found for the full size cupcakes is a deep enough blue to look sophisticated and adult (previous, lighter versions would bit better on sweets for a baby shower than on wedding cupcakes).

Next month, the challenge is piping.  I’ve purchased some beautiful ivory and gray cupcake wrappers that we’ll be using for the wedding, and I’d like to be able to imitate – if not copy – the leafy designs on them as the piped décor on one of the full sized cakes.  This will give me at least one more trial run with buttercream before the big day, and allow me to prove my theory about the mini cupcake flowers.  It will also, assuming Oregon’s weather gets its act together and remembers it’s Memorial Day weekend, give me a chance to see how the frosting behaves in warmer temperatures.

2 thoughts on “The Buttercream Project part 5”