So what does one do, you might ask, as a newly minted Doctor of Literature, unfettered from the everyday proletariat academic concerns?  Well, one grades, and one line edits, and one revises frantically, and frankly, one feels completely different and not different at all.  The school year isn’t over, even though (as of Tuesday, when I upload my “completed” dissertation to our Graduate School’s website) my degree is.  So my daily duties no longer include anxious preparing for the big day, but they still include student emails and lesson planning and reading.

But because they don’t include anxious preparation and last minute rethinking and nail biting about what the committee will think, these days can also include celebrations.  Last night was one such celebration: a party I’ve wanted to have for several years now.  The style: potluck.  The theme: “Food in Fiction.”  Interpretation: bring a dish inspired by or mentioned in a book.  That’s it.  There are so many vivid options in novel, drama and film, and our guests had only to choose one and recreate it in the material, taste-bud-bearing world.

We had tremendous fun, in brainstorming, in cooking, and in sharing the variety of dishes from books we love.  As I mentioned to one friend who thanked N. and I for the great party on his way out the door, this is a party we had to have before parting ways as many of us graduate this June, because only in this company could we feel so self-congratulatory and so excited about immersing ourselves in something so nerdy.

Here are a few of the dishes we enjoyed.  I suggested to folks that they provide the description of the food in question from its source text so guests would know what they were eating and which world it was taking them to.  We had Victorian sandwiches and High Modernism Stew nestling next to a magical realist chutney and a warm wassail of fantasy.  What wandering, all in one house…

Cucumber sandwiches from Oscar Wilde’s “The Importance of Being Earnest.” 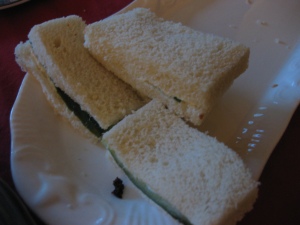 Boeuf en daube from Virginia Woolf’s To the Lighthouse.

A trio of deviled eggs to breathe life into Hemingway’s thoughts on being hard boiled in The Sun Also Rises.

A wonderfully smoky molasses cake inspired by the molasses-drenched dinner scene in Harper Lee’s To Kill A Mockingbird.

Well spiked butterbeer (you drop in a few marshmallows which, as they melt, mimic the foamy head on the beer) from J. K. Rowling’s Harry Potter series.

Not pictured: (more!) deviled eggs, from Toni Morrison’s Song of Solomon, sautéed marinated mushrooms inspired by Lewis Carroll’s Alice in Wonderland, raspberry cordial from L. M. Montgomery’s Anne of Green Gables, and a few sourceless delights: meatballs (Cloudy with a chance of, perhaps?), and a bread, cheese, and hard salami platter.  These were justified by their authors with the claims that “surely there must be moments of literary eating that include these items,” which I was quite willing, given their deliciousness, to accept.  And of course, wine.  If we were picky, we could call this an homage to Hemingway, whose characters “get tight” with abandon, or to Carroll’s Alice, who does imbibe from the mysterious bottle demanding she “drink me.”

I made two offerings: a take on the “green as grasshoppers” chutney so adored by Saleem in Salman Rushdie’s Midnight’s Children, and a pork pie stuffed with hard boiled eggs from Roald Dahl’s Danny the Champion of the World.  Both turned out extremely well, but I want to talk about the pie first.

Danny the Champion of the World is the story of a boy and his father.  Without giving too much away, I will only say that Danny’s father suffers an injury almost halfway into the book, and when Doc Spencer, the family physician, brings him home from the hospital to the gypsy caravan in which he and Danny live, Doc also brings Danny a package from his wife:

“Very carefully, I now began to unwrap the waxed paper from around the doctor’s present, and when I had finished, I saw before me the most enormous and beautiful pie in the world.  It was covered all over, top, sides, and bottom, with rich golden pastry.  I took a knife from beside the sink and cut out a wedge.  I started to eat it in my fingers, standing up.  It was a cold meat pie.  The meat was pink and tender with no fat or gristle in it, and there were hard-boiled eggs buried like treasures in several different places.  The taste was absolutely fabulous.  When I had finished the first slice, I cut another and ate that, too.  God bless Doctor Spencer, I thought.  And God bless Mrs. Spencer as well” (Dahl 85-86).

Since my first trip through Danny, I salivated over this savory pie Danny enjoys.  And this party was the perfect excuse to attempt my own.

I found a perfect (and much prettier) base recipe for my pie in the archives of the blog Married… With Dinner.  Though I followed their basic instructions, I made a few amendments for ease and expense.  The key points are as follows:

Use a springform pan.  That way the pie is tall and regal and can sit magically outside a pie plate all on its own.

Roll the bottom crust out large enough to come almost all the way up the sides of the springform (I used storebought crust and it work out just fine), so you can connect top and bottom more easily.

I squashed together a mixture of ground pork, pork sausage, finely chopped ham from a ham slice, salt, cayenne pepper, ground cloves, and black pepper.  I pressed a thin layer of the meat mixture onto the bottom of the pie crust, then laid six hard boiled eggs in a circle through the middle of the pie (regrettably, with ham-covered hands, I did not get a photo of this).  Then I lightly packed the rest of the meat mixture around and over the eggs and sank a bay leaf deep into the very center of the pie.

A traditional English pork pie has warm pork stock poured into a hole in the crust just after baking, which turns into a thick jelly as the pie cools.  This did not sound particularly delicious to me, though I did like the idea of a rich layer of something atop my pork.  I decided on cheese.  I grated about a cup of sharp cheddar and sprinkled it lightly on top of the meat before draping the top pie crust over it.  I cut a little hole in the center of the crust and sliced some steam vents for additional release before baking.

It’s a long baking process (almost two hours), but you are dealing with raw pork, so the cooking time needs to be sufficient.  When the pie is almost done, Married… With Dinner recommends you carefully release the spring on the pan and brush an egg wash all over the top and sides of the pie.  Fifteen minutes more in the oven and this results in a beautiful, shiny golden glaze all over the pie.  It also, in case you are lazy like me and didn’t brush an egg wash over the top edge of the bottom crust to help the lid adhere, creates an after-the-fact glue to hold base and lid together.

I let my pie cool on the counter for an hour or so, then tented it with aluminum foil and stowed it in the fridge until the party started.  It did, after all, have to be a cold meat pie. 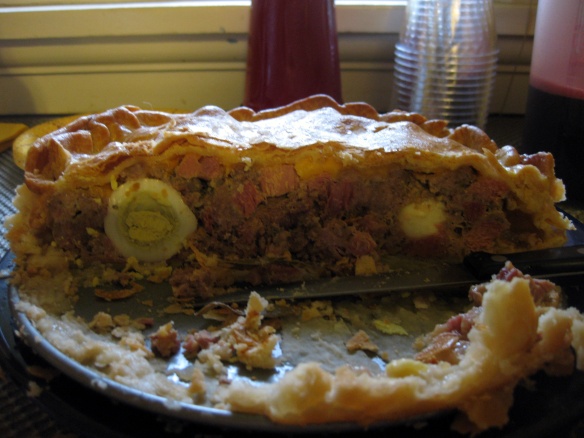 It was fabulous.  The meat was nicely spiced and the ham bits shredded in added some smoky, salty variety.  The hard boiled eggs were, indeed, delightful treasures to find, though I admit to over-boiling them slightly so their yolks were not as bright as they could have been.  Still, this is hardly a complaint.  It was like a meatloaf wrapped in flaky, buttery crust, and the cheese was a nice additional flavor and richness.  I suspect this could have been just as good warm as it was cold, but the pie might not have held together quite as nicely.

My second offering was a cilantro coconut chutney.  Saleem, as Midnight’s Children comes to a close, receives a meal from a blind waitress.  He lists:

“On the thali of victory: samosas, pakoras, rice, dal, puris; and green chutney.  Yes, a little aluminum bowl of chutney, green, my God, green as grasshoppers… and before long a puri was in my hand; and chutney was on the puri; and then I had tasted it, and almost imitated the fainting act of Picture Singh, because it had carried me back to a day when I emerged nine-fingered from a hospital and went into exile at the home of Hanif Aziz, and was given the best chutney in the world… the taste of the chutney was more than just an echo of that long-ago taste – it was the old taste itself, the very same, with the power of bringing back the past as if it had never been away…” (Rushdie 525).

I found a recipe for a coriander chutney replete with tart lemon juice, lip puckering spice from serrano chiles, and bright, bright green cilantro, tempered by shredded coconut.  The recipe called for unsweetened coconut but I, in my haste, having only sweetened, forgot to rinse it to get some of the sugar off before dropping it into my food processor.  As a result, my chutney was lightly sweetened, but no one seemed to mind that, especially when it was spread onto the pakoras I made. 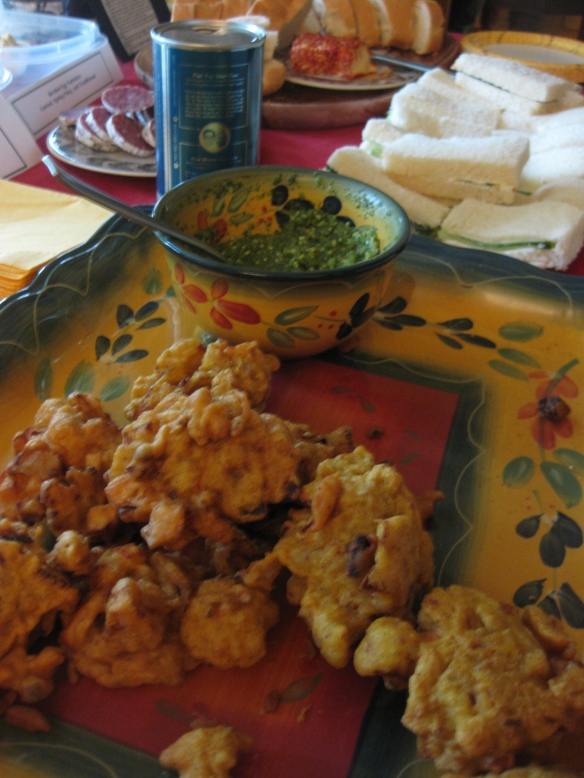 I searched around online and made a master recipe from a combination of ideas for these pakoras.  Mine included:

2 cups Bob’s Red Mill gluten-free all-purpose flour (pakoras are made with garbanzo bean flour, and though the Bob’s Red Mill mix is a blend including potato starch, it is composed mostly of garbanzo and fava bean flours, so since I had it, I decided a little break from tradition would be okay.  This is literature, after all.  It’s all interpretation anyway!)

Heat the vegetable oil to 375F in a large, sturdy pot.  I used my dutch oven.

While the oil heats, whisk together the dry ingredients and garlic until well combined, then slowly whisk in the water to form a thick, smooth batter.

Add the diced vegetables and stir to combine.

Drop spoonfuls of the batter (ever so carefully!  Watch out for splashes!) into the hot oil and fry for 5-6 minutes, or until the batter is deeply golden and the vegetables inside have magically cooked.

I got to taste one of these.  It was crunchy and starchy and slightly spicy and wholesome and delicious.  It was vegan.  It was gluten-free.  Topped with the chutney it was fresh and springy and spicy and then gone.  By the time I went back to have another, the giant platter I’d made was empty, and only a spoonful or two of chutney remained.  Pride overwhelms disappointment, in moments like these.  My little experiment was so successful it prohibited me from tasting further.  So I had another deviled egg instead.

Full and happy, we fell into bed at midnight with a sinkful of dishes and a fridge-full of leftovers to look forward to.  It’s like reopening a book to your favorite chapter: whose world will I lunch from, dine from, be returned to today?

1 thought on “Food from Fiction Potluck”