This is not the most photographically alluring side dish I’ve ever made. It doesn’t offer crisp angles or bright colors or sharp contrast. It doesn’t stack neatly or layer into a cup or offer much opportunity for props. It’s essentially just an inelegant heap of cauliflower and breadcrumbs, that most anemic of vegetables tumbled together with toasted panko. 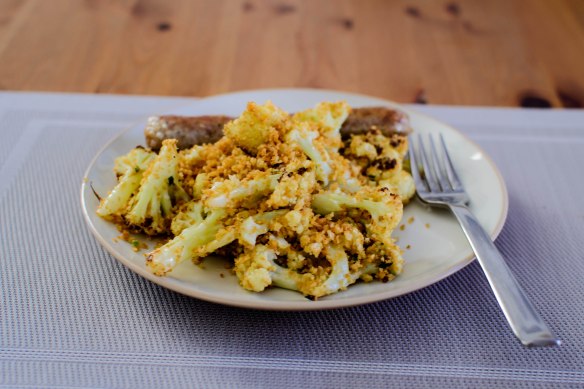 But here’s the thing: the cauliflower is roasted for a quick half hour at very high heat, so that its florets bronze and crisp but still retain some juiciness, and then the moment it comes steaming out of the oven, you toss it in a mixture of wasabi mayonnaise and chives, and then you douse the whole tray with panko that you’ve toasted in olive oil to an intense golden crunchiness, and you toss, and you pile it onto your plate, and what you find yourself most invested in is the size of the pile, not its aesthetic potential. 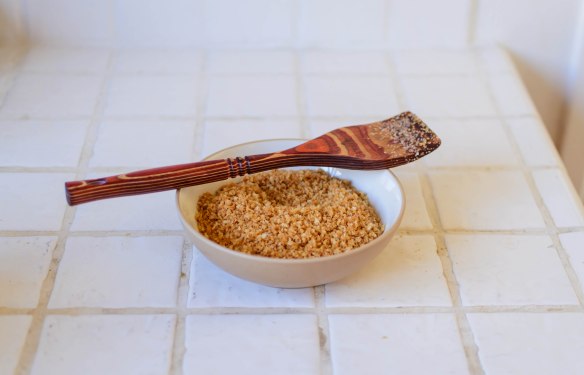 I found the basis for this simple little vegetable side among my mom’s recipes during the Christmas holiday. I typically go through her cookbooks when I visit, and this one was shoved into a binder with a collection of snippets and newspaper clippings from the food section, in her own handwriting, with the word “delicious” written at the bottom. I was intrigued, so I did what any technologically-steeped child does: I snapped a photo of the recipe with my phone, and then promptly forgot about it for two months. 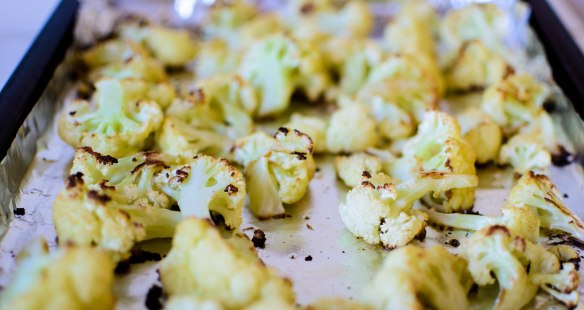 When I came back to the recipe a few weeks ago, I saw immediately that I would make a few changes. Mom’s version instructed me to steam the cauliflower, but I’ve never been a fan of the cabbage-y mustiness that steaming or boiling this particular vegetable produces. No, if part of the point was to elicit a crunch, then we would go the extra mile and roast it first. Hers suggested mixing regular mayonnaise with wasabi paste, and you can certainly do that if you want to adjust the level of spiciness, but there are a number of brands of pre-mixed wasabi mayonnaise available, and I happen to like the balance and ease of Trader Joe’s version, so I’m using that (though I’ve provided quantities for the mix-it-yourself-option as well). Mom probably used a standard American style breadcrumb, and toasted it in butter. I went for panko instead, for even more shattering crispness, and increased the quantity considerably for my breadcrumb-loving dining partner. 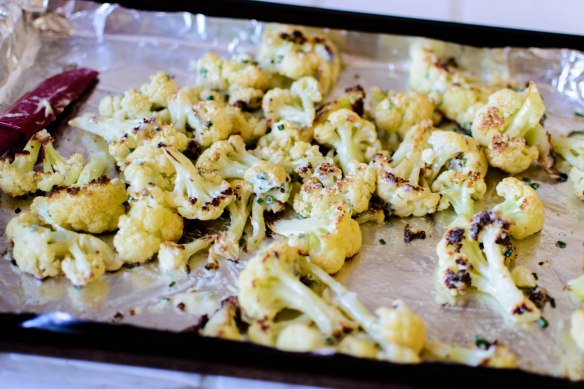 The first thing you notice when you eat this is the panko. It is toasty and deep with just enough salt, and just as you’re fully appreciating the texture, the wasabi hits with that perfumed, nostril-curling sharpness. You are taken aback at first, but you keep chewing, and then you get the tender/crisp roasted richness of the cauliflower underneath, and then you’re suddenly shoveling in another bite. We decimated our first tray in an embarrassingly short space of time, and I wanted to eat this again three days later. So we did. 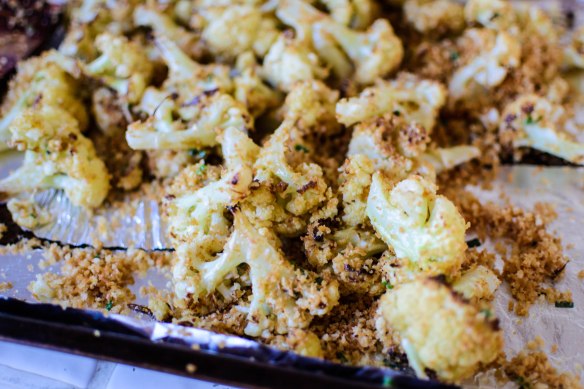 The first time I made this, we piled it next to fillets of salmon. The next time, it was a side for simple pan-browned bratwurst. It was perfect with both, and the hefty dosing of breadcrumbs means you likely won’t miss having a starch. You could dress things up a bit by adding a teaspoon or two of sesame oil to the olive oil you use to toast the panko or roast the cauliflower, and only after we were washing dishes after dinner did I consider the idea of combining the panko with some sesame seeds, or adding citrus zest for extra brightness, or pulverizing some dried seaweed sheets and tossing them in with the crumbs at the last minute. If you want to flirt with these possible additions, I’d suggest about 3 tablespoons of sesame seeds, or the zest of one lemon or lime, or 2 tablespoons of seaweed – it can be fairly strong.

* GUYS. IMPORTANT UPDATE ON THIS RECIPE. INSTEAD OF THE SESAME AND/OR SEAWEED SUGGESTED ABOVE, ADD ABOUT 2 TB FURIKAKE SEASONING TO YOUR PANKO. YOU’RE WELCOME.

(optional: zest from one lemon or one lime, or 3 tablespoons sesame seeds, or 2 tablespoons very finely chopped or pulverized dried seaweed, OR 2 TB furikake seasoning (sesame and seaweed lightly seasoned with salt and sugar)

1 large head of cauliflower, trimmed into medium florets (I went for large bite-size) 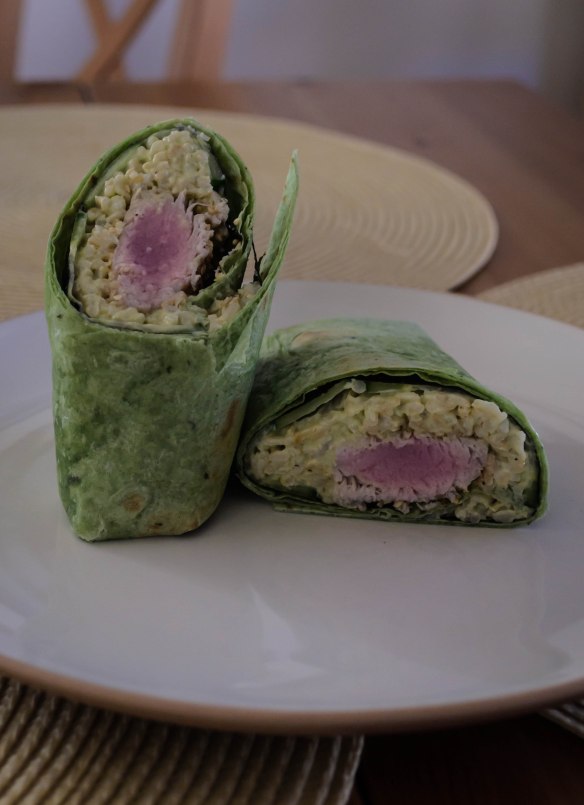 Months and months ago, I showed you photos of a tiny shack in Kauai and promised you my own rendition of their signature ahi nori wraps: thick, squared-off cylinders of seared ahi and spears of cucumber, surrounded by brown rice, doused with a mysterious wasabi sauce and wrapped up in a spinach flour tortilla lined with a sheet of nori. A delightful cross between a burrito and sushi, they were one of our favorite meals while on the island. But then, you know, life, with all those pesky obligations, insisted on happening, and now we are a full school year later and I’m finally getting around to it. It’s a cringe-worthy cliche to declare that these are worth the wait, but since we are now on our second version of them in two weeks, I’m going to take the chance. 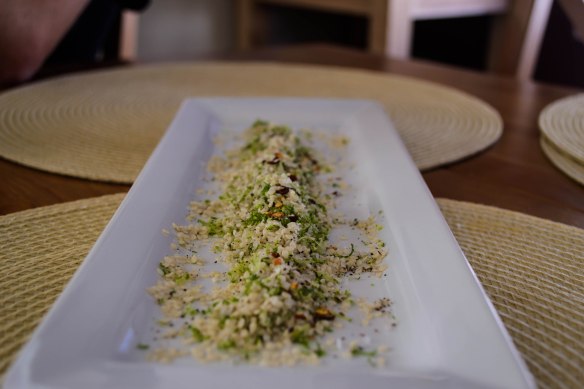 Since it has been so long, I’ve had plenty of time to reflect on what make these funny little sushi / burrito mash-ups so good. Well-spiced, lightly seared tuna, still rare or even raw in the middle, is of course the main reason. But only slightly secondary are the issues of texture and temperature. As you’ll know if you like sushi, there’s something amazing about a perfect piece of ahi – it’s meltingly soft but, when seared around the edges, it becomes softness with a bouncy chew. It is hot on the outsides, but still cool in the interior. Flanked by cucumbers, you get a fresh, bright, cold crispness, and the chewy strangeness of the nori seaweed layer is somehow perfect. 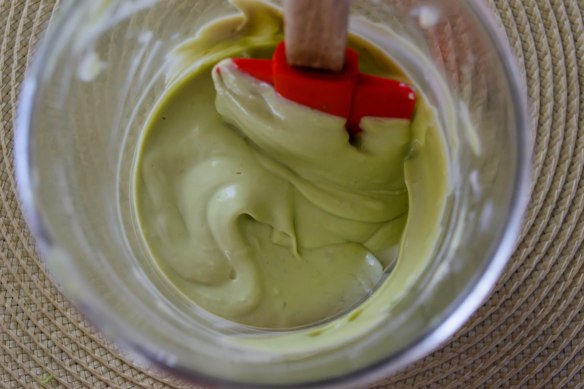 These also offer perfectly contrasting tastes. Of course there’s the glorious fresh fish flavor, but there’s also nostril-piercing heat from the wasabi, and saltiness from the seaweed, and the welcome nutty blandness of the rice. Because I can’t leave well enough alone, I thought the addition of rich, creamy avocado blitzed into a velvet puree with a touch of mayonnaise would be the right vehicle for the wasabi, and insisted on crusting the tuna itself with sesame seeds, lime zest, and some red pepper flakes as well as the customary salt and pepper sprinkle before searing it off. 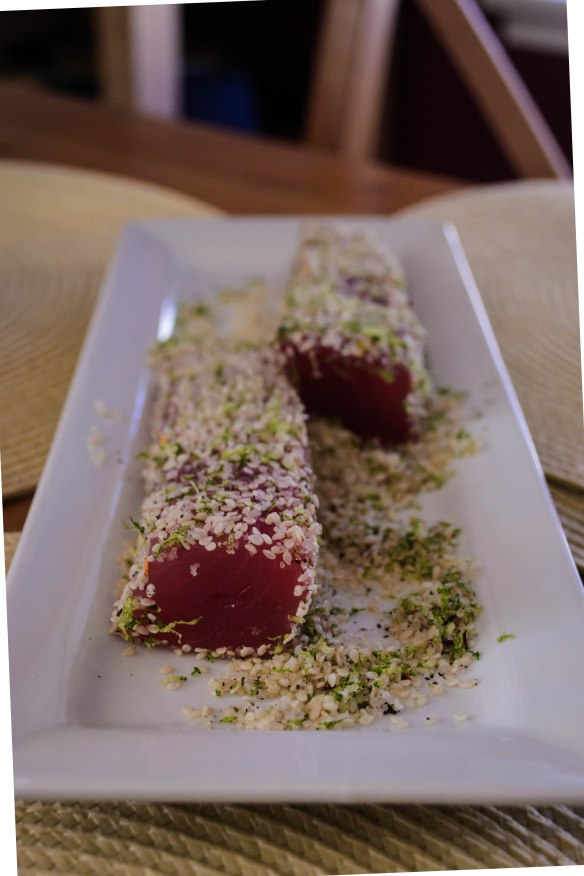 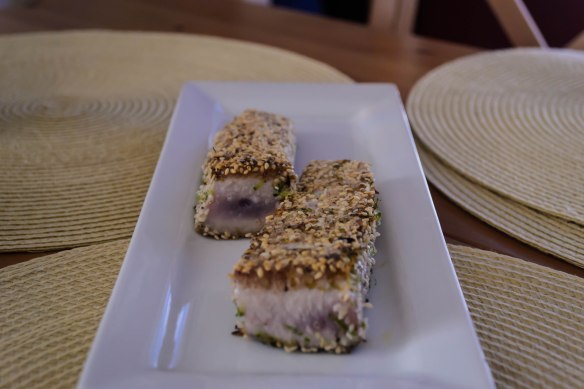 We ate these in big gulps, then went back for more. One wrap is plenty for a dinner, especially if you wisely offer yourself a side of mango-spiked salad or lightly sautéed vegetables, but we are not always wise, and opted instead to make a third wrap and split it. Still, even the resulting food coma couldn’t deter our enthusiasm about the meal. 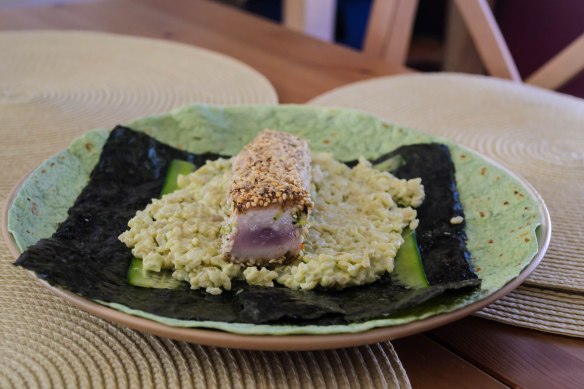 If you aren’t comfortable with raw fish, you can of course cook yours all the way through, though if you’re going to do that I wouldn’t bother with the pricey ahi. Cut a nice filet of salmon into long strips and crust and sauté or broil until just cooked through. Or, if you want to go an even easier route, sprinkle some lime juice over a few layers of smoked salmon and wrap that up inside instead. 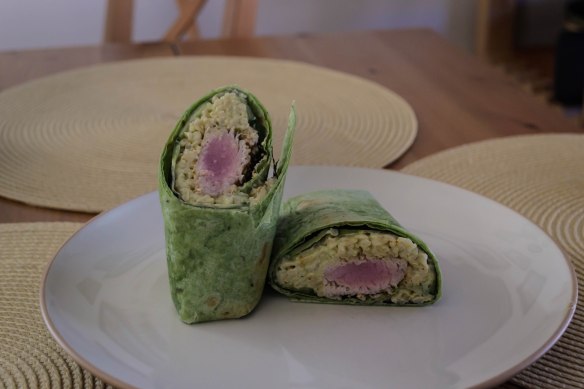 For rice and sauce:

juice from ½ a lime

(alternatively, you could use about ¼ cup of wasabi mayonnaise)

½ pound ahi or other sushi grade tuna, cut into long rectangles that are about 1×1 inch at the ends

1 seedless cucumber, halved lengthwise and cut into long, thin planks (thinner is better – too thick and they won’t roll up well. Go for translucent, but be careful!)

Have a question or feedback? Email me at blackberryeating@gmail.com
Follow "blackberry-eating in late September" on WordPress.com
Join 471 other followers