Last week I made cupcakes for a baby shower, and tried out this petal piping tutorial from Savory Sweet Life. 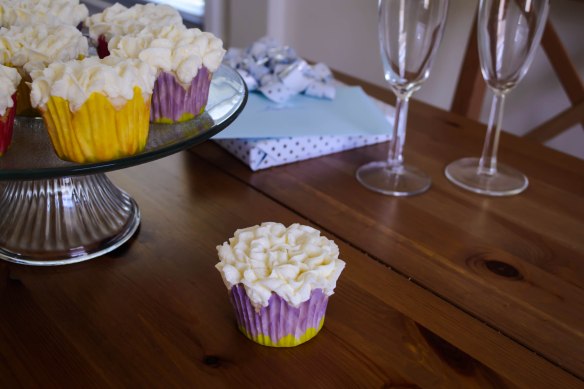 Let’s see that from another angle. 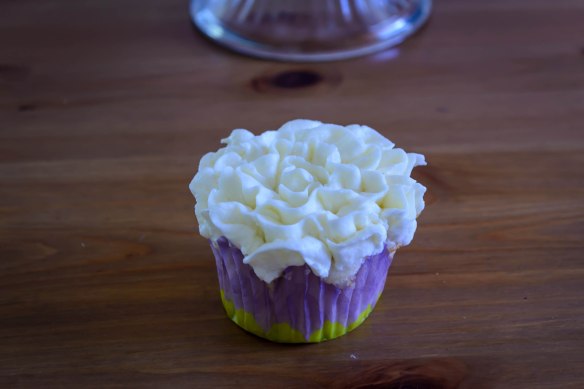 Saturday morning – Wedding day! – was beautiful and bright and promising.  Our now-from-Seattle friends had arrived the night before, we’d all slept, the cakes had chilled, and now after a brief wedding day breakfast with the bride and groom’s families and out of town guests, I’d be on to decorating.  When I settled in to the buttercream production this time, I had an epiphany.  At Mom’s house, I had used an electric hand mixer instead of a stand mixer, and the buttercream had been fluffy and smooth and glorious.  What if, instead of using the paddle attachment on my stand mixer, I used the whisk?

This was, finally, the right thing to do.  I wish fervently I had thought of it the first day.  The frosting came together faster, and whipped up a bit smoother.  It was, I perhaps imagined, brighter ivory than the previous batches, and there were no chunks of butter to cause me piping distress.  If only, if only, the day before… but that is immaterial (and perhaps inaccurate too, since there were other factors, other differences, like the temperature of the butter, the temperature of the cheese, the amount of time spent whipping, the quantity of lime juice, etc) .

I piped.  I piped and I piped.  And things started to look better.  A lot better.  Most of the worst imperfections were hidden under the ivory and then delicate blue swirls and scrolls I snaked onto the cakes.  They actually started to look nice.  This might not be a disaster after all.  When I added a ring of round, pearl-like blobs to the bottom border of each, I started to feel happy with my project.

With the cakes done, all that remained were 92 miniature cupcakes.  All.  Right.  I had half a bowl of perfectly blue frosting.  Against my own better judgment (hey, it had worked out okay the day before with the gelatin in the filling), instead of starting over with a brand new batch, I decided to add more butter and more powdered sugar to the bowl, and try to tint it to match what I had already done as I went.  It worked.  I wanted a slightly thicker consistency of frosting for the flowers I planned to pipe so this mixture had to be more butter than mascarpone.  That worked out well, really, because I was out of mascarpone again anyway.

With time ticking, I filled up another piping bag with one of the new rose petal tips H. had bought me and went to work, remembering what I’d learned months ago about which way to swivel the cupcake as I frosted.  It took me a handful to get into a groove, remembering when to apply pressure and when to release, but once I got going I was making beautiful little horseshoe movements that resulted in sugary flower petals!  To perfect the color (not baby blue, but not dark blue either), I’d mixed a tiny bit of black gel dye in with the blue.  This resulted in a lovely periwinkle with just a hint of gray, matching almost exactly the blue on the couple’s save-the-date cards.  The exact blue of the wedding.  Boom.

N. would probably like me to add here that as I finished each handful of minis, he deliberately drizzled on a small quantity of silver-gray sprinkles.  My dear friend M., who arrived in mid-afternoon to coo over the product and do my hair for the event, would probably also like me to add that she took over sprinkling duties for the last dozen or so.  In fact, it was M. and S. who saw me through the last sheet tray of minis as, hand aching from the constant pressure and odd angle, I suddenly realized I was going to finish.

The winery where the wedding took place was a half hour drive from town on winding and sometimes roughly surfaced roads.  Though we positioned the cakes and cupcakes carefully in the back of our Subaru, I still got a little white-knuckled every time N. drove around the bend.  What if, after all that work, we got going a little too fast and one of the cakes slid into the side of the car?  What if, despite the air conditioning running at full blast, it was too hot in the car and the frosting started to slump off?  What if we did get there safely, but I dropped a cake on the way from the parking lot into the building?  I had packed flats as well as a bag of white frosting and a bag of blue in case of an emergency, but I’m not sure I was emotionally prepared to fix any problems that might happen on the way.  Not in a busy winery with the bride and groom’s families darting around setting things up.

Fortunately I didn’t have to.  Three or four of the minis fell over during our ride, but because I’d stuck them in the freezer for a few minutes while I got dressed, their frosting remained hard enough that it didn’t crumple much.

Setup was easy and disaster free.  Some of the wedding party helped carry the precious cargo in from the car, and when every last cupcake was situated on the table, I have to say it looked pretty fantastic.  I made a wedding cake.  And people liked it.

Final thoughts on this massive saga: I will not be going into the wedding cake business.  I would happily make another cake or three for friends who requested it, but I think I’d want to go to at least one cake decorating class first.  I will also not use American buttercream again, except for petal work like I did on the minis.  It’s just too sweet.  I loved the taste of the cakes I made, and the filling was a wonderful, bright tartness (the color contrast was great too), but the buttercream was just achingly sweet, even with the addition of lime juice to the mix.  For my sophomore performance, if I ever have such an opportunity, I would try an Italian or Swiss buttercream instead, relying on cooked egg whites for structure rather than powdered sugar.  As a thank you, J. and H. let me keep all the baking and decorating equipment they bought for the project (thanks again, you two!), so I’m set for all kinds of future practice.

I have to say, though, despite all my moaning and complaining and anxiety, I was really happy with how the cakes looked, and delighted with the reactions I received.  The bride and groom took home the leftovers and ate them the next day, and the one after that.  They were still good.  N. and I ate the trimmings and cupcake guts smothered in leftover filling, and they were delicious.  It was, regardless of the exhaustion and concern during the journey, a monumental success.  I can only thank J. and H. for letting me be such a big part of their day, and wish them all the joy in the world – joy like clouds of powdered sugar, perhaps – for the rest of their lives together.  N. and I love you both.