Garlic herb salt, drying on the counter: the greatest air freshener you could ask for.

Sometimes, when you are on a two-and-a-half-week-vacation-road-trip, you don’t cook anything.  Go figure.  And then when you get home, and you want to get something up onto your own little space on the internet for your own little community of new friends and virtual friends and “hey, I even know some of you in real life!” friends, you don’t have a new recipe to share with them.  So because I bummed around the Pacific Northwest last week, digging my toes in the beach and trying not to sob with joy at the most beautiful wedding I’ve ever attended and gorging myself on everything I’ve missed from the restaurants and bars I used to frequent during graduate school, I considered what food might sum up my vacation activities, and hit upon salt.  The Pacific and the Puget Sound, my brimming tears, savory car snacks, and a visit with one of my most devoted salt fiend friends (more on that in a few…), and plain old sodium seems like the right choice to talk about today.

That’s right; I’m going to talk about salt.  This might seem like the plainest of the plain, the ever so banal, and maybe it is.  But aside from being a perfect food item to represent my vacation, salt is really important.  Before refrigeration, salt was one of the surest bets for preserving food.  Salt, vinegar, and sugar could keep your food from spoiling for some time, and though sugar is a recent and expensive addition to this preservation party, salt and vinegar are ancient methods, often used together, as we see in the case of pickles and sauerkraut, among others.  Salt has been used as a burial offering, it has been taxed, it has been smuggled and ground and flaked and sprinkled and immortalized in verse.  Its history is interwoven with crime and slavery and back-breaking work and colonization and maybe even heart disease.  It has killed, it can kill, but it also keeps us alive.  Michael Ruhlman has written a much more impassioned defense of this funny little crystal than I could, but just trust me when I say that we really shouldn’t, and even couldn’t, do without it.

(And, on a much less serious note: if you get home from a party… like, say, a moving and beautiful wedding during which you danced so hard you might have destroyed your shoes, and smiled so much your face hurt for two days afterwards, and you realize that you might have drunk enough that you’re going to be sorry about it in the morning, take a teaspoon or so of salt with a glass or two of water and a couple of Ibuprofen, and you’re all but guaranteed to feel pretty dandy the next morning.  My friend A. calls it the Salt Lick, and it totally works.)

But as essential as salt is, and as ubiquitous, it’s far from singular.  As it turns out, I have four different kinds of salt in my kitchen right now.  And unlike the depths of the poultry seasoning collection, I use them all. 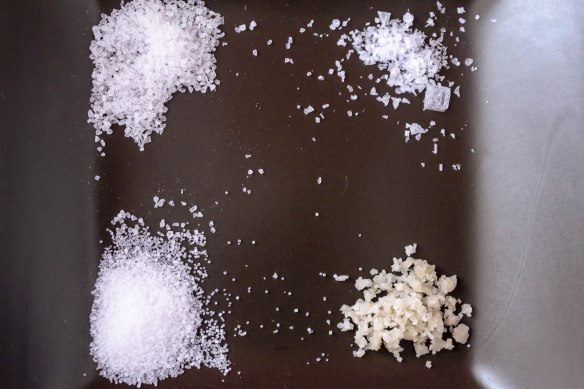 First, let’s talk Maldon sea salt, my favorite finishing salt of all time.  That’s the top right corner, if you’re following along with the visual.  It’s flaky and crunchy and crusty, and tastes like the ocean dried on your lips.  It is beautiful with caramel, or on top of biscuits, or sprinkled over a still warm chocolate chip cookie (this might sound weird, if you’re not a sweet-and-salty devotee, but just try it.  You’ll be glad you did).

Top left is coarse sea salt, which I mainly funnel sloppily into my salt grinder, to use when a dish needs some last minute seasoning, or when we have guests and I want to look all fancy by putting salt and pepper on the table.

Of course I’ve got good old table salt, in that pile in the bottom left.  You know, with the little metal spout that squeals when you open and close it?  I use this mainly when I’m following recipes.  Since salt comes it a lot of different sized crystals, measurements actually will be different depending on what kind you are using.  Most call for the simple, relatively fine grind of table salt.

Finally, there’s my newest love, here in the bottom right: gray sea salt.  This is in larger, chunkier crystals than the Maldon, and is a harder crunch because it’s less flaky.  It clings together almost like damp sand, which I like because it reminds me of the ocean it came from.  The gray color is from mineral content, which I like because it makes me feel like it’s somehow really good for me.  I use this in bread dough and pizza dough – it seems less salty than regular table salt (it’s not, though – they are just unrefined crystals that, when processed a bit, become plain old Morton), and though most of it breaks down during the rising and cooking, some tenacious crystals do hold up, which means the occasional treat of a crunchy, salty bite.

There are many more that I don’t stock or have never even tried – pink Himalayan salt, black lava salt, rock salt, good old Kosher salt, the strange and possibly blasphemous popcorn and butter flavored salts, the odd herbed salts, garlic salt and celery salt and smoked salt.  And in lieu of a real recipe, I’d like to offer you a little bit of awesome that you will be hardpressed to believe is really a coincidence. 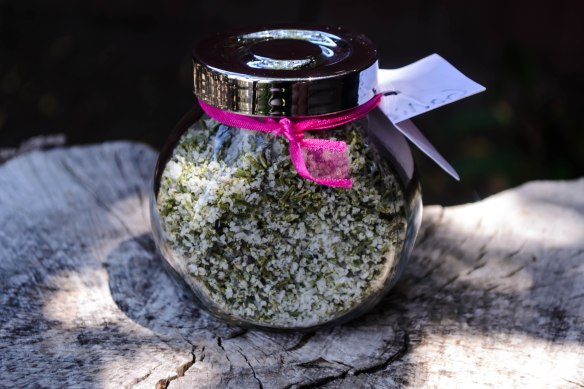 Let me explain.  When we arrived in Seaside, OR, the final leg of our massive road trip, I already had this post drafted.  Promise.  I had known for almost a week that I was going to talk about salt.  I even had a bit of something in lieu of a recipe to present.  But upon our arrival, our friend Taylor (the aforementioned salt fiend, who is also a guest contributor on the smart, feminist media and pop culture blog Girls Like Giants and co-writer of a Project Runway review column on Simply Showbiz, masquerading under the pseudonym Andy Others) blew all that out of the water when she presented us with a little hostess gift: a jar of garlic herb salt.  What could be more perfect?  So I asked her to do a little guest post here to share how she made this sweet little jar that smells at once like the ocean and the best garlic bread you’ve ever tasted.

“I was driving home from grocery shopping and listening to the ever-genteel ‘Splendid Table‘ on the car radio. Lynn was talking to a woman named Sally Schneider, and together they told me that I have been wasting my money for years. You see, I am a sucker for flavored salts. Truffle salt and tomato salt are my all-time favorites, but anyone can make me happy by giving me salt combined with something, especially if part of that something is garlic. But Lynn and Sally showed me the truth! You don’t have to spend your own money on this. Salt is actually so amazing that it does the work for you. Let me say that again: the salt does the work for you. Salt! Is there nothing it cannot improve?

A mini-vacation with old friends was fast approaching, so I thought, what better way to welcome and thank them than with a homemade salt of my own? Plus I could show off how competently I grow herbs, which is always a bonus. I love appearing competent. 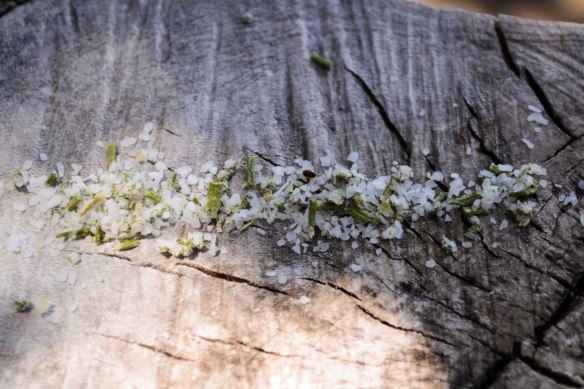 Sally Schneider told Lynn about the simple pleasure of making this salt by hand, but I chose to let competence merge with laziness instead. It could not have been easier. I peeled about 8 cloves of garlic (more than the recipe called for, but garlic is one of my great loves). I put them in the belly of my food processor with about 2 tablespoons of kosher salt. I pulsed until the garlic was mostly chopped. Then I added a tablespoon of culinary lavender flowers, about a cup of sage leaves, and about a cup of rosemary, stripped from its stem. (I thought about adding lemon zest, but I decided not to overdose on too many flavors… this time.) I pulsed and pulsed until the mixture became a coarse, slightly damp sand. Next I dumped that “sand” onto a baking sheet and mixed it up with about another ¾ cup of salt. I measured by color more than by quantity; I know how much herb I like in an herb salt, so I aimed for an even green distribution. Finally, I set the baking sheet on the filing cabinet by my kitchen window and just let it sit for two days. The salt dehydrates the garlic and herbs for you, while filling your kitchen with the smell of totally effortless deliciousness. Some people think it will be good on roast chicken; I say popcorn. Now what will people get me for my birthday?”

To good friends!  To vacation!  To salt.