I can’t remember the last time Labor Day was a holiday for me.  I mean, I haven’t worked on Labor Day in a long time – perhaps ever.  But I spent the past eleven years or so attending universities organized around the quarter system: school starts in late September and ends in mid June.  That means when this magical Monday hit and working stiffs got to switch off their alarms, I was still on summer vacation.

Boo hoo, you say, poor thing!  You had to suffer through a non-holiday because you were on holiday!  But I’d remind you that for a graduate student, even allotted holidays don’t read as such.  A Monday is another toil-on-the-dissertation day.

And yet, today, with one week of class behind me at my new job, I did not have to make the pilgrimage to Burbank.  I did not have to spend the weekend lesson planning.  Ahead of me spans a week with one (one!) day of class.  It’s enough to make a girl sob with joy!

And then there are onions.  Which are enough to make a girl sob as well, though the accompanying emotion differs a little.

These are two Bittman “recipes.”  I realized recently that, as usual, my Bittman project has fallen by the wayside.  A brief count reveals that, of the list of 82 with which I began (the whole collection has 101 items, but I knew there were some N. and I would just never eat), 34 still remain unmade.  Most are soups.  That sounds like decent progress, until I remind you that I began this project 2 years ago.  But this year, beginning for me – as for every eternal academic – at the end of summer, is a year of renewed possibility.  It’s a year of everything refreshed: new home, new jobs, new opportunities.  It’s a year to relish.

3. Red Onion with Red Wine and Rosemary: Thinly slice red onions and cook them in olive oil until very soft.  Add chopped rosemary and red wine, and cook until the jam thickens.

Onions take a long time to cook down the way I suspected they needed to for this recipe.  High heat makes for crumpled, browned, crispy-edged rings.  Delicious in their own right, but not for jam.  I baby-sat the onions over medium-low heat for at least half an hour.  Their pearly-white interiors turned fragile gold as if stained by the olive oil, and their textures changed, gaining an unctuous flexibility. 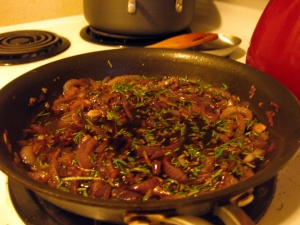 I added the salt and pepper, the rosemary, the red wine and the brown sugar and stirred together carefully to dissolve the sugar.  This simmered for another half hour until the wine, sugar, and onions came together into a sticky heady mahogany swamp in the pan.  As the wine reduced, I lowered the temperature to prevent any burning.

The finished jam slumped wonderfully over baked squares of polenta, providing contrast in all the best ways: the colors were sharp, the textures played together, the flavors were rich and lovely.  The onion jam was sweet with the tang of wine and the pine-forest warmth of rosemary.  The polenta was comforting and even flavored, and it needed the sharp sweetness the jam provided.  Steamed asparagus finished out the meal. 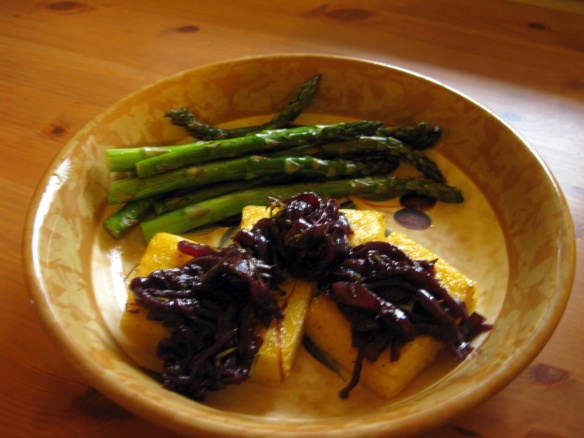 It sounds crazy, but the next morning I had the urge to drape some of this sticky, savory jam over a piece of whole-grain toast smeared with cream cheese.  It would also, I suspect, serve well spread over a turkey burger.

A number of circumstances divide these two onion concoctions.  One was made in Oregon, one was made in California.  One was made in the cold drear of an oppressively long winter, one was made on a day of endless sun as August closed.  One was slowly reduced over an electric stove, one was browned in a gas oven, and though both were shot with digital cameras, you’re seeing one through the lens of an everything-automatic Canon PowerShot, and the other through a Nikon DSLR.  Changes to relish.

3-4 TB pumpkinseeds, toasted in a dry pan until they are flushed with brown and starting to pop

In a 400F oven, I roasted the olive oil coated onion slices until they collapsed, taking on a lovely burnished crispness.  This took probably 10-20 minutes.  Check often after 10 minutes, depending upon how hot your oven runs.  Liberate the toasty onion slices and let them cool. 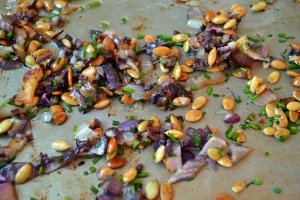 When onions are cool, chop them finely and toss them with the other ingredients.  I had plenty of olive oil in my baking pan to coat all the ingredients so the relish glistened, but if you need it, feel free to add another glug or two.

I served lovely little spoons of this mixture over black bean cakes.  We traded tastes, taking in the relish in one bite and an avocado tomato salad in the next.  It was a nice pairing: the relish was moist and crunchy and savory, with the right kind of nutty richness to complement the dense potential blandness of the beans.

But I don’t think this relish ends as a condiment for beans.  It would be a spectacular topping for lamb.  Spiced with a little chili powder, it would fit perfectly atop pumpkin enchiladas.  It might even be a good garnish for butternut squash soup: a small heap of confetti in a velvet orange sea, interrupting the endless smoothness with a well-oiled crunch.

Will I finish this Bittman project by the end of the calendar year?  I don’t know.  But I’m enjoying it again, whereas during the last few months of dissertating I was finding it burdensome.  The thrill of guessing quantities, rather than being annoyed by lack of specificity, is returning.  The intuition about temperature and time is audible again.  And now, on this holiday that has never felt like a holiday before, I’m relishing it all.