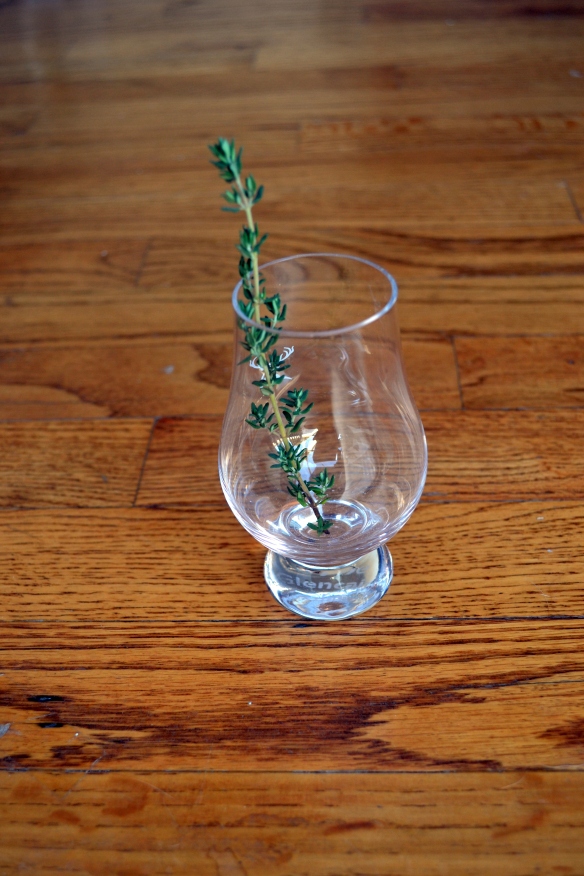 Thyme for our herbed biscuits

Last week’s reflections were a bit morose: the thoughts of a person overwhelmed and trying to settle into some kind of groove.  Because while too deep grooves can become ruts, no groove at all just leaves us… squares in a hipster-filled world?  Not just squares, but squares tipping and zig-zagging confusedly over an unfamiliar landscape trying to dig a corner in here and there.  New home, new job, new routine, and no chances to explore yet.

All that has changed.  Shallow wheel marks dig in behind us.  Our adventures have begun, and they began (don’t be offended) with booze.

Last Friday, our dear friend J. appeared at the door, bearing duty-free Japanese whiskey from his time in Tokyo, and a phone full of bar recommendations from an associate.  After a quick tour of our new digs (you guys have a backyard?!), we set off into the night and ended up at Oldfield’s Liquor Room on Venice, where J. bought me a pre-birthday cocktail called the Blonde Comet.  Bourbon, crème de peach, fresh grapefruit juice, and angostura bitters.  I’m not much of a bourbon gal, but the name was too good to pass up.  I like to think of myself as something of a blonde comet every once in a while… The drink was tasty.  Strong, but tempered by the freshness of the grapefruit and the stem of fresh mint they plunged in as a garnish.

We caught up over this first round and then decided to explore further.  A quick amble down the street brought us to Bigfoot West, but it was so crowded and loud inside that not even the promise of creative whiskey cocktails could entice us.  We were back in J.’s car and rolling toward Santa Monica.

We ended up at The Daily Pint, where it smelled like peat and old shoes and yeast, and the impressive chalkboards full of beer options and the seemingly endless whiskey and scotch menu made J.’s and N.’s eyes shine suspiciously.  I got (don’t laugh) a pint of Spiced Caramel Apple Ale that was neither as sweet nor as fruity as it sounds.  J. and N. got something peaty and boggy and fiery, and I only needed a whiff to know I wasn’t interested.  We settled ourselves in at a tall table next to the pool and shuffleboard stations.  You must know this: I don’t like beer.  When I have to, I will settle for the fruitiest, sweetest, most un-beer-like option I can find, and when I do, I like it to be ice cold so it doesn’t have a chance to taste as much like beer as I know it’s going to.  As we sat and chatted and laughed, time passed and my beer warmed.  Where it tasted like yeast and carbonation to begin with, as it came to room temperature the flavors got rounder and deeper, and by the time I was sipping the last half inch or so in the glass it did have some spicy apple flavors to it.  I’m not sure I would order it again, but it wasn’t a bad beer, and the company and high energy atmosphere made it a good experiment.

It was almost midnight when J. asked if we wanted a snack.  He was thinking, he said, hot dogs or pastrami.  I’ve been experiencing some cognitive dissonance when it comes to our new location – scoffing when I see patrol cars that say LAPD on the side: what are we, in a movie or something? – grinning with disbelief as I pass Warner Brothers studios on my drive home from work – but something about that night made me remember where we were.  I just knew he was thinking of Pink’s.  Did I want to go to the little stand with the most famous hot dogs in the state?  Yes.  Yes I did.

At almost 1am, as my contacts screamed and the almost-responsible-adult inside me withered and gave up, we were standing in line with at least 30 other people, waiting for a hot dog.

I got a New York dog – traditional hot dog topped with a sweet onion sauce – and added shredded cheddar cheese.  N. and J. got Chicago dogs, loaded with lettuce, tomato, and pickle.  We sat at a crooked little table and took in the space: dozens upon dozens of signed celebrity photographs who had visited Pink’s, some of whom had given their names to a hot dog.

Well, N. and J. took in the space.  I took in my hot dog.  It was fantastic.  The skin was taut and crisp and snapped between my teeth.  The onion sauce was thick and sweet with hints of caramel, like the best sweet and sour sauce you’ve ever tasted, and the cheese, though it could have been melted more, added a nice mellow counterpoint to the meat and the sauce.  Delicious.  And it made me feel like a kid: I was back to the nights in high school when, after band competitions, we used to go to Denny’s and order chili cheese fries and chocolate milkshakes.  Those were the days before we knew heartburn was real…

There really is no logical transition I can make to this week’s Bittman, aside from the lame play on the White Stripes song I provided as the title of this post, so let’s stop pretending and just talk about biscuits.  And let’s not take our sweet little time about it.

With measurements and oven temp clearly provided, I had very little to guess about or change in this recipe.  Because I was using lemon in other parts of dinner, I decided on the spur of the moment to add a teaspoon or two of lemon zest to the dough to see what would happen.  You could probably change up the herb used, add cracked black pepper or flaky sea salt, or even add finely chopped raisins.  I wouldn’t change the buttermilk, though, as the tang it adds is entirely necessary.  I even got excited tasting the raw dough, with a slight crunch from the salt and a suggestion of sweetness from the tiny bit of sugar.

The bowl of dough produced 15 biscuits.  I put nine on my greased baking tray and the other 6 on a plastic-wrap-lined plate in the freezer for another occasion.  After 15 minutes in the oven, they were browned on top, slightly crunchy around the outsides, and knee-waveringly fluffy inside.  Quash your fears about the amount of butter here: it really makes a worthwhile textural difference.  It doesn’t hurt the flavor either – these were rich but light, and the buttermilk and lemon zest added intriguing sourness that brightened the mixture and made them more interesting than your standard dinner biscuit.

We ate these – no, that’s not right – we wolfed them down alongside grilled chicken sausages and grilled planks of zucchini wrapped around a mixture of goat cheese, lemon juice, thyme, parsley, and pepper.

It was delightful.  And here’s the delicious secret: if you end up with some leftover goat cheese mixture, and you whip in some honey, and then if you happen to split one of those fluffy delightful biscuits down the middle and perhaps toast the open sides in a toaster oven or under the broiler for a moment, and dollop a hefty tablespoon of the sweetened goat cheese on top, and eat it, you have the most delightful little end-of-summer breakfast biscuit you’ve had in years.  And if you’d been out late the night before and perhaps chased some whiskey with a hot dog, a sprinkle of extra salt in the goat cheese filling would make this a quite decent hangover breakfast too, as a cure for excessive adventuring.

Next week we settle more comfortably into this lovely little groove we’re making for ourselves: another restaurant, another Bittman, another decade(!), of our new little lives.