Yes, I know I’ve already moved.  Yes, I know I’m now in a pattern of filling the fridge, not emptying it.  But moving, like writing, is a process, and I have to catch you up.  And that means talking about what I’ve done before I get into what I’m doing… 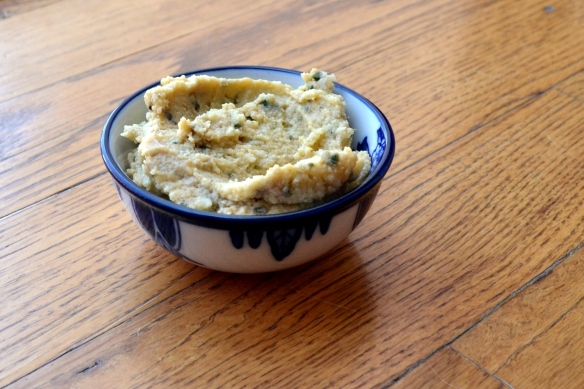 This recipe fruited during a hummus drought.  I had evicted all garbanzos from my pantry – not from lack of desire, but from too much desire: hummus-hummus-all-the-time.  And at first, facing the multiple cans of cannellini beans in the cupboard, I thought I might just whip up some hummus-with-white-beans.  But beans, like chilis, seem to call for applications appropriate to their specific qualities.  No one makes poblano salsa, for example.  Jalapenos are needed.  Tabasco sauce, to no surprise, can only truly be made with tabascos.  So white beans, as adequately as they might suit, are just not destined for hummus.  And really, when you’ve been scarfing down a batch a week, it might be time to try something different anyway.

So I faced off against the white beans and thought about accompaniments.  Like most dips – hummus, pesto, artichoke (maybe?) – it would need a few players with whom to harmonize and energize.  Acid.  Herbs.  Salt, of course.  Maybe some spice.  Maybe, given the circumstances, whatever I had lying around…

Out of rosemary, which seemed like a natural pairing (check the web: white beans and rosemary are easy, well established lovers), I did have some toasted, salted, rosemary-infused marcona almonds begging to be consumed.  Almonds in bean dip?  Why not?  Pesto couldn’t operate without pine nuts, and walnuts whir excellently together with roasted red pepper.  Lemon seemed too stringent, but an aging orange called me from the fruit basket.  Like adding colors to an outfit, each ingredient meant slowly ruling out and pulling in other things.  Orange and garlic don’t fit together well, at least not across my palate.  So some other sharpness was needed, and I opted for cayenne pepper.  Almonds and beans could be a bland marriage.  Couples therapy recommends adding some spice.

What came out of the food processor on a tentative spatula dip was a smooth creamy whisper of something amazing.  I’m not exaggerating.  It was warm, it was earthy, it was perfumed and heated and comforting.  As soon as we finished slathering this odd little puree all over crackers, and tortillas, and those amazing raisin rosemary crisps from Trader Joe’s (more on that in a bit…), we wanted more.  So I made it again.  And this time I wrote some things down and made some adjustments.  And some more adjustments.

You may have noticed, if you read this page with any frequency, that with the necessary and understandable exception of buttercream, I am not big on repeating recipes.  Most of what I post I have never made before and never made again.  It’s a shot in the dark.  It’s all experimentation.  Love it or leave it.  Or play with it yourself until it’s right for you.  But guys, I’ve worked on this one.  I’ve a real recipe to share that you can actually follow.  I’ve forced myself to note and follow my own suggested quantities to make sure yours will emerge the same way (well, sometimes my hand slipped a bit, but I’ll have you know I scolded myself resolutely for that and I won’t do it again.  This time).

So here it is, my perhaps overly-annotated almond and white bean dip.  Some of the ingredient quantities are listed in ranges.  I suggest you begin with the smaller quantity and increase as your taste buds request. 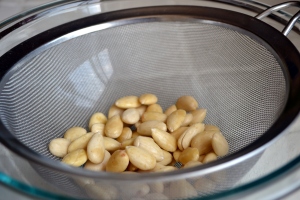 ½ cup almonds, skinned and toasted.  Marcona almonds are best but most expensive, so choose as your budget permits (this doesn’t mean you have to pay top price for pre-skinned almonds, though.  To easily slip their coverings away, put your almonds in a bowl, pour boiling or near boiling water over them, and let them stew for 3-5 minutes.  Drain, and when they are cool enough to handle, you should be able to pinch them into nudity in moments.  Skinless, they are mild and meaty/fruity and ivory-pale, and you can then quickly toast them in a pan until they begin to brown and exude fragrant oil)

1 15oz. can of white beans (cannellini are creamiest, but great northern and unspecific “white beans”) will do just fine

3 TB fresh rosemary leaves (you can, if you wish, just strip them from their stems and toss them into the food processor.  This may result in larger green snippets and a dip chunkier in texture than you want, so depending upon how obsessed with smoothness you are, you can mince the rosemary finely before adding it in)

¼ – ½ cup juice from the same large orange (you could use orange juice from a container, but I think it just doesn’t taste as fresh or bright)

Pinch cayenne pepper, or to taste *

A generous ½ cup fruity olive oil (I use extra virgin) 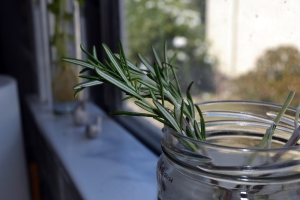 In a food processor, pulse almonds until only small chunks remain (texture should be like very coarse sand, but not yet broken down into butter).

Add all remaining ingredients except olive oil and pulse three or four times, until all ingredients are mixed but large clumps resist blending.

Drizzle in olive oil slowly through your food processor’s top spout.  The mixture should whir together into a creamy and relatively homogenous spread.  Continue to process until it reaches the texture you desire.  Chunky and smooth are both fine by me.  Taste, season if desired, and taste again.  Chill for an hour or two to allow flavors to entwine, and bring to room temperature before serving.

* A note on seasoning: during the hour or two of chilling time, flavors will intensify.  Salt, spice, and sharpness will become more pronounced after allowing the dip to sit.  Therefore, it might be wise to minutely underseason the first time you make this.  If it tastes a touch bland, it might not in a few hours.  If it’s already pretty spicy, be aware it will get spicier as it sits.  This is not a bad thing, but something of which to be aware.

Now you have your dip.  Or spread.  Or puree.  Depends on how long you processed.  But dips – and spreads – all on their own are incomplete.  They need a vehicle.  And in this case, with this dip, it needs just the right vehicle.  It’s not garlic driven, it’s not overwhelmingly pungent.  It hovers on the edge of savory.  It could even, if you were feeling a deep need for warmth and comfort, take a drizzle of honey and still be delicious.  It errs toward the sweeter side.  A tortilla chip just won’t do.  A pita chip leaves something to be desired. 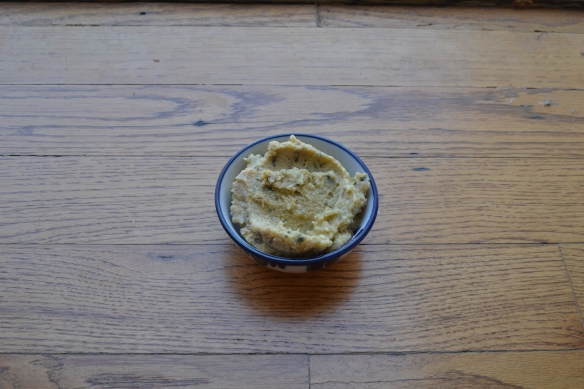 A rosemary raisin crisp from Trader Joe’s makes it sing.  And I was content with that.  But then I looked at the ingredient list for these crisps and saw flax, millet, sunflower seeds… all, oddly, items in my pantry that needed using up.

So another project before perfection, which I will tell you about next week: the cracker soap-box derby.  Recreating the perfect vehicle for my perfect spread.