Today’s entry rounds out my eighth month of this sauce project. I’ve learned a number of things thus far, but the one that remains the most challenging is this: sauce is a component, not a complete product. That means you must not only execute the sauce itself, but you also have to decide what to drizzle, spoon, scoop, pour, or dab it over! 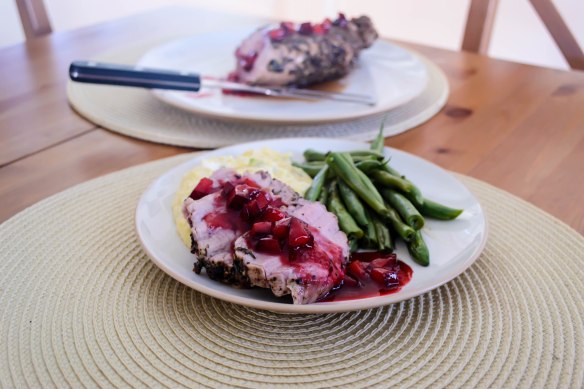 Sometimes this is quite simple. Hollandaise, for example, is such a classic that eggs benedict spring immediately to mind. A few weeks ago, my meunière sauce had a similar effect, demanding as it does a particular fish to moisten and flavor. And in fact, once I figured out what the next entry in my little project would be, I had no trouble dreaming up how I would serve it. It would be a gastrique – a French sauce that melts sugar and vinegar together into a thick, sweet-sour glaze. Mine, since it’s the height of summer and every week I can’t help but fill a bag with stone fruit at our local Farmers’ Market, would be dressed up a touch with the addition of plums. As soon as I knew this, I knew I wanted to serve it over moist lovely slices of pork tenderloin. Easy. Done.

Let’s straighten out an unfortunate item of business here, friends. N. doesn’t like pork. Oh he loves bacon. Sausage, especially breakfast sausage, is a treat. He’ll eat various smoked and cured pig-based items: prosciutto and pancetta are consumed with gusto and exotics like guanciale or chorizo are just fine. He’ll even tolerate ham, though it wouldn’t be his first choice. But pork itself, not treated with smoke or salt or brine, elicits a sneer. He would never order pork tenderloin in a restaurant. Ribs are more trouble than they’re worth. Even pulled pork had better be swimming in a pretty flavorful sauce to keep him interested. I have to get my pork chop fix when I visit my parents without him. It doesn’t seem to matter if it’s breaded and fried, grilled up, or seared and roasted. He’ll have the chicken, thanks.

This, as you can imagine, was a considerable wrench aimed at my little plan. But the idea of silky, tangy, liquid plum dribbling over a thick slice of tenderloin sounded too good. I decided he would just have to deal. So I rolled the tenderloin in a blend of crushed peppercorns, coarse salt, and thyme leaves. I seared it, I roasted it, I let it rest. I cut it in thick, moist slices and served him a few with a coating of ruby sauce.

He went back for seconds. Later, I caught him in the refrigerator tasting just one more slice. He considered piling the leftovers onto some sourdough for a lunch sandwich the next day. Um, pork. 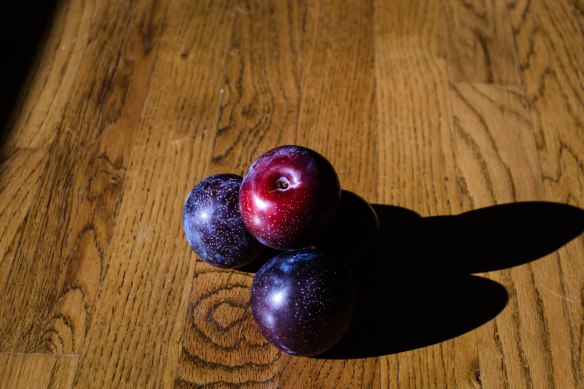 I can only figure one of two answers here. One, it could be that the heat from the crushed peppercorns was so powerful that it disguised the porcine flavor he’s so tepid about. Two, and this is the option I choose to believe: the pairing was so perfect, and the gastrique so sublimely flavored, that he couldn’t help himself but to fall hard for the combination.

Whichever it was, and however you feel about pork, this sauce is definitely worth trying. No butter this time; this sauce contains no dairy, no eggs, and no flour. It’s completely different from every other sauce I’ve approached thus far, with one exception: it must be simmered to thicken. Here, though, rather than emulsifying butter or letting flour granules soak up liquid or gently cooking egg yolks to coax out their protein strands, we’re contending with melting sugar and evaporating water content. In my version, the sugar and vinegar required to make this a gastrique are joined by gloriously ripe red plums, cooked down into a jammy pulp (helped out with the determined application of a potato masher), strained, and then returned to the pan just to help a few bits of diced raw plum heat through, for some texture. And all of this happens while the pork is cooking, so everything is ready to go at roughly the same time.

If you’re not a pork tenderloin fan, I think this would also work really well with salmon, or with various varieties of poultry. It would also provide the perfect wilt as the dressing in a warm salad of dark leafy greens; I’d opt for spinach. And save the skins and pulp after you’ve strained out the glorious velvet sauce. Warm or cool, perhaps with an additional sprinkle of sugar, they make a fantastic tart spread for toast.

1-2 tablespoons whole black peppercorns, crushed (we used 2 tablespoons, which was aggressively peppery. If you are concerned about spice, try 1 tablespoon)

4 ripe plums, divided (the riper they are, the faster they will cook down)

Have a question or feedback? Email me at blackberryeating@gmail.com
Follow "blackberry-eating in late September" on WordPress.com
Join 471 other followers