And sometimes you are faced with too much: too much bounty, too much responsibility, too much joy.  These are both their own kind of problem.  And if I have to choose, faced with these Januses, I will always go for too much.  Even if I fall short. 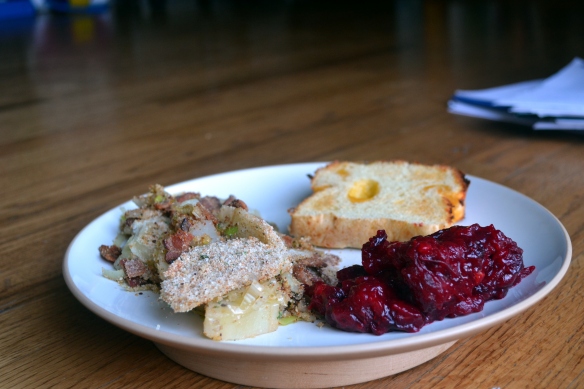 Last week I only managed one Bittman.  This week, in a startling display of ambition and motivation, I did three.

One of the biggest challenges of this project (aside from cooking, photographing, and writing about the food… you know… actually doing it…) has been deciding what to serve these dishes with.  I’m not up for roasting a chicken or a turkey every week to emulate the Thanksgiving spirit of the project, so I try to piece them together with other entrees.  As you’ve seen, if you’ve been following the project for any length of time, sometimes I choose well, and sometimes I decidedly don’t.

This week, riffling through the slowly diminishing options, it occurred to me for the first time that I could serve them as complements to each other.  They were all, after all, conceived for the same imagined table.  They should work together quite nicely.

“7. Cranberry-Orange Sauce: Cook a bag of fresh cranberries with orange and lemon zest, cut up (peeled) orange segments, ¼ cup sugar (or to taste) and a bit of minced jalapeño or chipotle.”

This sounded good and, with the slightly cooler temperatures we’ve been privileged to receive lately, a nice symbol of our entry into Fall.  Cranberries and oranges are a frequent couple – almost too expected – but there’s a reason they appear together so frequently.  And with the addition of lemon juice and some spice, this seemed far enough from traditional to avoid being boring.

¼ – ½ cup sugar, depending on your taste and the tartness of your berries

Dash of spice, depending on your taste

I bounced the cranberries into a pot, zested the lemon and oranges over them, and then cut the peel from the orange and sliced out supremes.  For good measure, I squeezed as much juice from the wasted scraps of orange as I could, then topped the mix with sugar and a dusting of cayenne (I had neither jalapeno or chipotle available) and pushed it onto the back burner.

I let the pot come to a boil over medium heat, stirring occasionally to melt the sugar evenly and prevent it from burning until the cranberries released some juice to protect the mixture.  Once it boiled, I lowered the heat and let the whole thing simmer for about 20 minutes.  At one point I tasted, decided there wasn’t enough sugar or cayenne, and added more of both.  The addition of sugar was a good thing.  The addition of more cayenne was less so.  I’d caution you to start with less than you think you will want.  The mixture does not taste at all spicy while it’s hot.  When it cools, though, it becomes fiery.  It was still tasty, though.  We ate it sticky and thick and room temperature, dabbing up popped clusters of ruby and letting it linger on our tongues – but not too long – enough to wake our taste buds from the spice.  As an autumnal side, this works very well and is a pleasant update to the traditional cranberry sauce.  It would also make a glorious topping for a baked brie, perhaps with some rosemary or red wine glugged in for good measure.

While the cranberry sauce was heating, I turned my attention to its companion.

“59. Blanch thinly sliced potato and leeks until tender but not mushy; drain well. Layer the vegetables in an oiled or buttered baking dish, then top with a mixture of bread crumbs and lightly sautéed chopped bacon (some cheese mixed in is pretty good, too). Broil until golden brown.”

Potatoes and leeks are a combination that, a mere year or so ago, I didn’t realize existed.  Now it’s such a natural pairing I can’t believe I never knew about it before.  Sliced blanched potatoes and sautéed leeks now fill every frittata I make.  I collected:

1 massive leek, tough tops and root ends removed, halved vertically (rinse it out well at this point) and sliced into slim, slim, oh-so-slim half moons

Knowing how good leeks can be when they are sweated and barely brown, and conscious that the beauty of bacon grease shouldn’t go to waste, I made a few changes to Bittman’s directions.

First I cooked the bacon.  You likely don’t need a whole pound of it, but this guaranteed an appetizer: one still sizzling slice each for N. and for me.  If you aren’t cooking for or with someone else, go wild and have two all by your lonesome.

While the bacon cooked and the cranberries simmered and popped, I put a pot of water on to boil.  When its aggressive bubbling demanded attention, I carefully lowered in the potato slices and gave them free reign for five or ten minutes.

When it was edging toward crisp, I set the bacon aside to cool and drain a bit on a paper towel lined plate.  I dumped the potatoes into a colander when they were barely cooked through.

Time for the leeks.  I scraped my board free of the slender, just green shards, capturing a satisfying fizz as the vegetation hit the pan.  You want to stir with some frequency here, and not raise the heat above medium; we’re looking for a light sauté, not a heavy brown.

The shards collapsed into resistant-less ribbons, and I pushed them to one side to add the drained, cooling potatoes.  With adept wooden spoon manipulation, I managed to achieve something like layering: half the potatoes flat on the bottom of the pan, the leeks draped across them, and the rest of the potato slices on top.

I turned on my broiler, and while it heated I crumbled the bacon, tossed it with bread crumbs, and dusted the potatoes with the mixture.  But dust wasn’t enough.  They required a landslide.  I drizzled the top with olive oil, knowing the bread crumbs would need it to brown, and slid the whole pan into the broiler (note: if you use a skillet or pan for this, rather than a casserole dish, be sure you wrap any plastic or rubber with aluminum foil before you put it into the broiler.  We don’t want your nice pan handles to melt…).

Five minutes later, the parts of the crumble I had oiled were beautiful brown (the other parts remained sandy and unaltered, much to my chagrin) and the dog was close by, nose moist with curiosity and the urge to assist.

We loaded our plates, completing the meal with a completely unnecessary slice of toasted jalapeno cheese bread, and ate.

As has proved often the case with Bittman’s layered vegetable dishes, I expected this one to be a gratin, and it just wasn’t.  Some cream, some cheddar cheese, some binding between the vegetables, would have been ideal.  But not crucial.  They weren’t supposed to be scalloped potatoes, after all.  The bacon and bread crumbs made them exciting, and the leeks were almost creamy nestled between the thick slices.  Honestly, forgetting to salt the water I boiled the potatoes in was the only real unfortunate mistake.  Two down, with only one mistake (two, I suppose, if you count the overly spicy cranberries, which I suppose I do), is pretty promising.

To make this a trifecta, on another night I chose another autumnal option.

“64. Mushroom Bread Pudding: Put 6 cups of good bread (day-old is best) cut into 1-inch chunks into a buttered baking dish. Beat 4 eggs with 2 cups of milk and ½ cup grated Parmesan and pour over the bread. Sauté 4 cups of sliced mushrooms until tender with a teaspoon or two fresh thyme leaves and mix into the bread. Bake until just set, about 40 minutes.”

Mushrooms and thyme are so nice together.  They are earthy and deep and musty, like the back of a dark pantry into which no anxious hands have reached for some time.  Since they were more precise than usual, I followed Bittman’s ingredient quantities almost to the letter.

I sautéed the mushrooms and thyme in butter, taking time to let the slices soak up the butter, then expel their own liquid.  Only after that, as the moisture from the mushrooms evaporates from the pan, can the mushrooms take on the same kind of crisp brown sear as a steak pressed into a screamingly hot pan.

While the mushrooms cooled, I tore up the crusts of a month’s worth of sourdough bread (I keep them in the freezer for just these sorts of occasions) and pressed them gently into a buttered square glass baking dish.  I grated cheese – swiss and parmesan – and cracked eggs from the Farmers’ Market into a bowl, marveling at the rich orange yolks you just can’t get in the grocery store.  I stabbed them, flooded them with milk, and whisked in the cheese.

I turned to assembly.  First, mushrooms must be tossed with bread.  Attempt even distribution.  Then, a careful, rich pour of the dairy component, taking care to attend to the corners, until the bread almost floated in a puddle of would-be custard.

One of the things I’ve learned in my years of bread pudding production is that pressure and soaking time yield the best results.  I carefully pressed a layer of plastic wrap over the top of my pudding and set it in the fridge for an hour, while N. and I answered the velvet brown eyes begging for “walkies.”

Upon our return, it was as simple as preheating the oven to 375F (pull the pudding out of the fridge and let it approach room temperature as your oven heats), sliding the baking dish onto a rack, and reluctantly grading a paper or two as 45 minutes ticked by (I like my bread pudding a little more than “just” set).

A puff in the center signifies doneness.  Mine levitated just barely in the middle, but the custard was set and the edges of bread not submerged were crisp and darkly golden.

The serving spoon broke sharply through the crisp top but then exhaled through the custard underneath.  Piled on our plates next to an amazing skillet casserole of deeply browned sautéed Brussels sprouts and chopped walnuts drizzled with a balsamic glaze, we accepted its golden softness.  With a higher ratio of eggs to milk than most bread puddings I’ve made, this had almost a soufflé quality, though vastly more substantial.  It was rich and earthy and savory, and I suspect it will be just as good for breakfast as it was for dinner.

Three more down.  This can be done.  2012 has already been a year of many accomplishments.  Why not go for too many, rather than hesitating at not enough?

1 thought on “Three for One”