Oh friends, it happened.  I made it.  Yesterday I made the last two Bittmans on my list and completed, albeit a year later than I’d originally intended, my project.  I have reflections to share, certainly, and I have changes and excitement and promises for the new year, but first, I think, let’s work with the program.  Two Bittmans.  Two reports:

“14. Steam or poach 2 cups of pumpkin cubes until tender. Meanwhile, sauté 1 cup sliced shiitake mushroom caps in vegetable oil with a few drops of sesame oil. Boil 4 cups water and whisk some of it with ⅓ to ½ cup of miso. Stir miso mixture, pumpkin and mushrooms into water and heat everything through, then serve, drizzled with more sesame oil.”

Because we were planning to reach midnight by snacking, I wanted a light dinner to precede the countdown.  This seemed to fit the bill.  And it had to, after all, since it was the only soup left and the calendar was screaming December 31st.

2 cups peeled, cubed butternut squash (I had some in the fridge, and suspected pumpkin would be hard to find)

¼ tsp (or to taste) toasted sesame oil, plus some for drizzling

To reconstitute my shiitake mushrooms, I soaked them in a mixture of white wine and almost boiling water for 15-20 minutes, until they were plump and soft.

When the mushrooms were tender, I scooped them out of their bath and decided the remnants shouldn’t go to waste.  I poured the soaking broth into a little pot to bring to a boil, so I could use this already flavored liquid as the base for my soup.  While it heated, I stemmed and sliced the mushrooms.

Since the shiitakes were now basically cooked, I probably could have skipped Bittman’s sautéing step.  But honestly, I’m not one to pass up the opportunity to ingest sesame oil, so I dutifully dribbled vegetable oil with a few (or a few more than a few) drops of sesame oil in the (drained and dried) pan I’d used to simmer my squash and sautéed the mushroom slices over medium heat until they dried out a bit and started to take on some color.

While this colorization happened, slowly and so aromatically, I made the broth.  I poured all three miso soup seasoning packets – tofu and seaweed and all – into a small dish, then mixed in about ½ cup of my heated mushroom soaking liquid and whisked gently to dissolve the powdery soup mix.  This created a slightly thickened slurry, which I poured with the rest of the liquid and the butternut squash cubes into the mushroom pan. 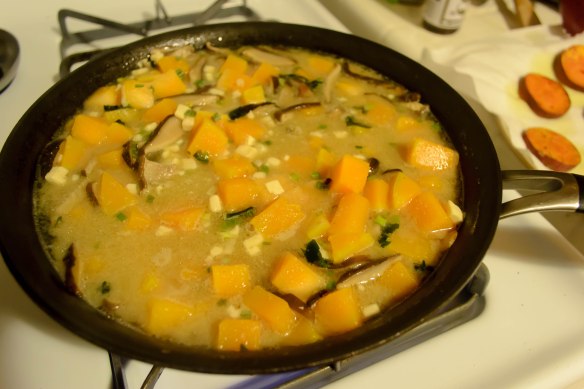 After a few moments of reheating, we dipped up bowlfuls and ate.

N. wasn’t sure (he sometimes takes issue with the texture of reconstituted mushrooms), but I inhaled it with devotion.  I love the flavor of miso soup, and the mild sweetness of butternut squash against the salty umami and fleshy squish of the mushrooms was lovely.

It was light but still satisfying, and the tofu and vegetables from the soup mix were so welcome that I’d advise you, if you are using straight miso rather than a pre-mixed, additive laden packet, to consider adding some tofu or seaweed or green onion just to contribute a little substance and contrast to the soup.

Dinner done, we moved on to the second stage of the evening.

“89. Vegetable crackers: Slice beets, sweet potatoes, plantains or parsnips or all of the above into 1/8-inch disks (a mandoline is helpful) and toss lightly in olive oil. Spread the slices on baking sheets, sprinkle with salt, pepper and, if you like, other seasonings and bake at 400 degrees for 10 to 12 minutes. When browned, flip the chips over and bake for another 10 minutes or so.”

This sounded tasty, and I’d always intended to make it for a party.  With a dear friend coming over to ring in the new year with us, and since hunks of cheese alone might be deemed a slightly imbalanced offering (though so, so delicious…), this seemed like a perfect opportunity.  Beets were out of the question (N.’s nemeses since childhood), and I couldn’t find plantains in my grocery store’s produce section, so we were left with the nutty herbiness of parsnips and the always dependable earthy sweetness of sweet potato.

1 tsp each (or to taste) salt, pepper, and garam masala

To prepare for roasting, preheat the oven to 400F and line two cookie sheets with aluminum foil.  Drizzle with olive oil and spread to cover the surface of the foil evenly.

While the oven preheats, tackle the vegetables.  I don’t have a mandoline, but I do have a ruler, and I must confess I did bring it to the kitchen to give myself a better idea of what 1/8 inch looks like.  My slices were not quite even, but they did verge on passable.  I tossed them – big coins of harvest orange and speckled white – in a glass bowl with the olive oil and the spices until they were evenly coated. 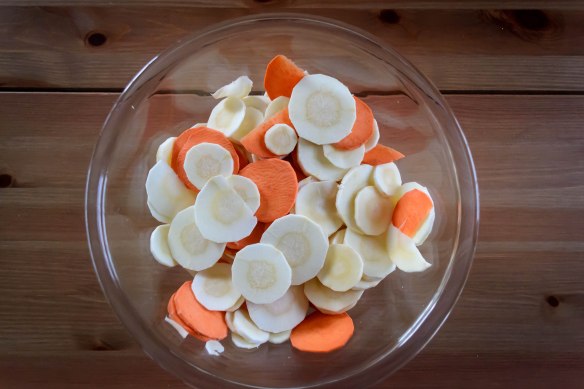 Spread the vegetable coins across the cookie sheets in a single layer, not overlapping, not in piles.  If they cook in a stack, they will soften but not brown or crisp.  Stow them in the oven for 12-15 minutes, or until they are just beginning to brown.

This next step is a true exercise in patience.  Unless you are far more talented with a spatula than I, you will have to flip each piece over individually.  You have to, because otherwise one side will burn and the other side will flutter limply into cooked-but-not-crisp status.  Trust me on this one.  When you have laboriously flipped each coin, shove the tray back into the oven for another 10-12 minutes.

At this point, you’ll have to use your judgment.  My offerings were, after this additional time, cooked through but not remotely cracker-like in texture.  Another five minutes in the oven might have done the trick.  Putting them back in, failing to set a timer, and heading to the couch to eat dinner (I was trying to multitask) is not advisable.  I didn’t remember them until I smelled the slightly spicy aroma of parsnips, and by then it was too late – many of the little coins had gone from crackers to briquets.

I decided to pick out the worst offenders – Lucy reports that she didn’t mind a bit of charred flavor – and eat the salvageable ones anyway. 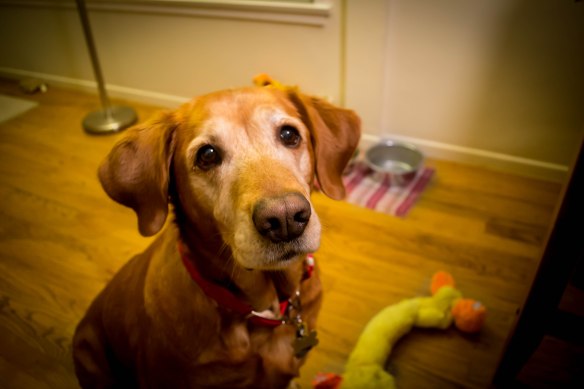 To make them a bit more exciting (and disguise any lingering burned taste) I made a little dipping sauce.  You’ll need:

Whisk the first three ingredients together with a fork until they are smooth.  In increments, add Greek yogurt until your sauce reaches the desired thickness.  Mine was about the consistency of ranch dressing, but much more interesting in flavor.

These crackers (with and without the sauce) were – if you were able to overlook the overcooking – a nice alternative to crudites or store-bought crackers.  They weren’t quite as crispy (except the ones that were too crispy), but they had a lovely deep flavor and none of the powdery, processed taste some crackers can have.  They are also a gluten-free offering and, minus the yogurt and honey sauce, vegan as well.

I served them alongside a cheese platter, 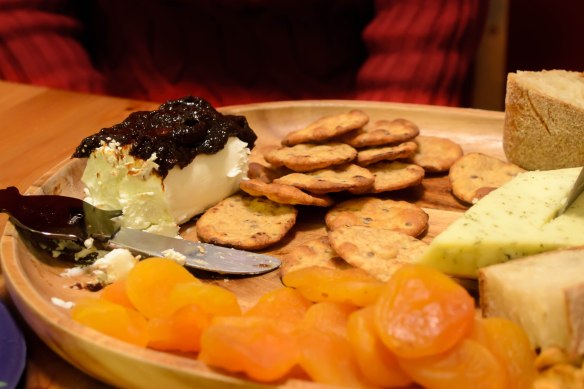 and my appetizer version of Bittman’s “Marshmallow Topping for Adults” dish: thick discs of sweet potato roasted until tender, topped with a dollop of cream cheese and sprinkled with a pecan brown sugar blend before being broiled until the sugar bubbles and the cheese slackens toward melting. 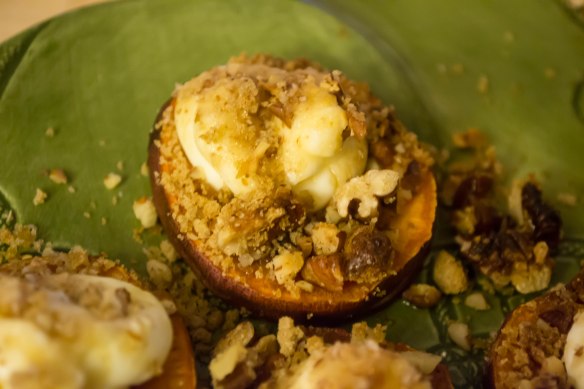 And champagne, of course.

Happy New Year.  I hope you celebrate your achievements, meet your goals, and find happiness in your own self.  I’ll be checking in again later this week with some reflections and announcements.  Welcome to 2013.