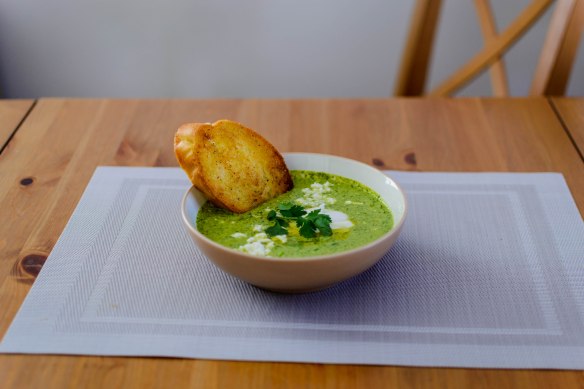 You know I don’t usually do this – usually I report on something delicious, sharing the recipe so you can make it too – but I owe you a soup for May, and there’s absolutely zero chance of a recipe next week, since the moving truck comes on Friday(!!!!), so here we go (and besides, the photos came out so nicely). This one was… weird. It wasn’t bad, but it also wasn’t remotely our favorite. If you’re into an herby, grassy taste, you should go for it. 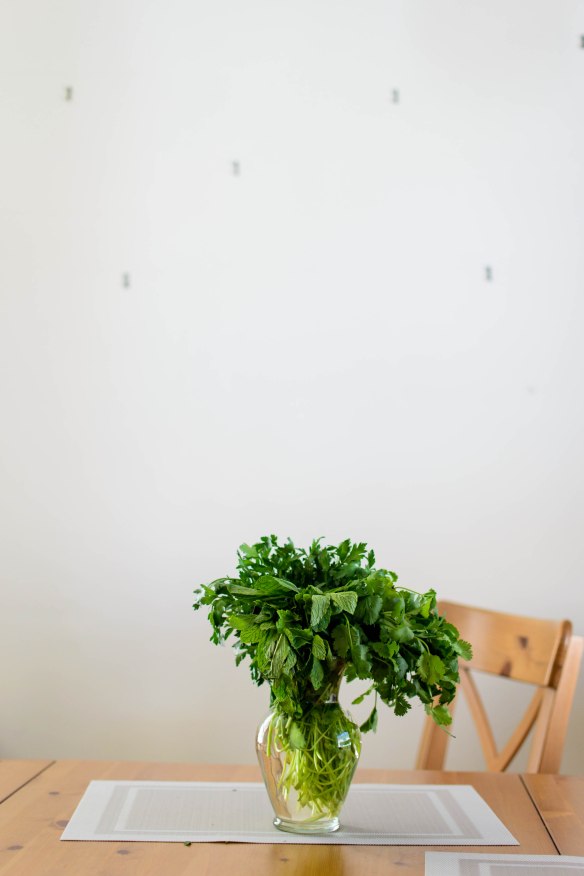 The base here is a soup recipe from Ottolenghi that blends spinach, parsley, cilantro, and mint with a base of onions and garlic and broth. I added arugula to mine as well as some mustard seeds, and ended up with a murky green concoction that, I have to admit, was reminiscent of high quality lawn clippings. N. called it “pesto soup,” and despite the absence of basil, I tended to agree – thickened up a bit and tossed with pasta, it would have been delightful. 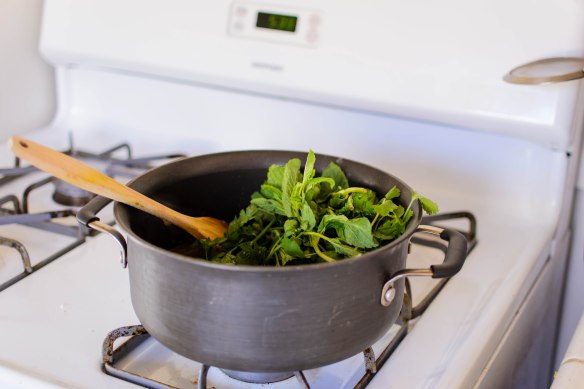 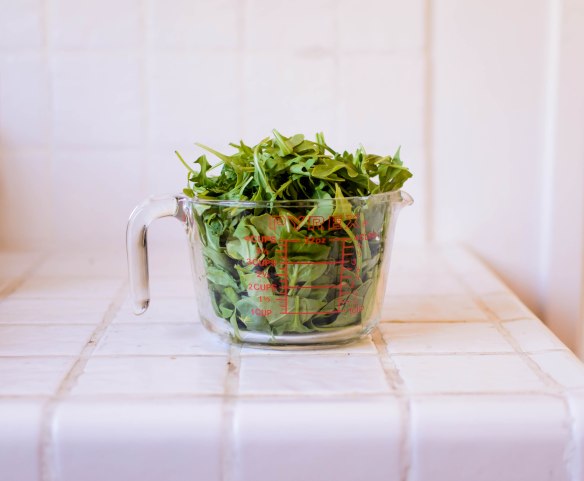 Ever the glutton, I decided what this soup needed to add interest and richness was a poached egg, that darling of chefs everywhere (seriously, I think adding an egg is the culinary equivalent of “put a bird on it.”), and I was right. Broken into the soup, the yolk cut through some of the earthiness of the greens that got even better with the addition of a crunchy slice of garlic rubbed toast. So, in other words, the soup was improved by adding other things to the soup. 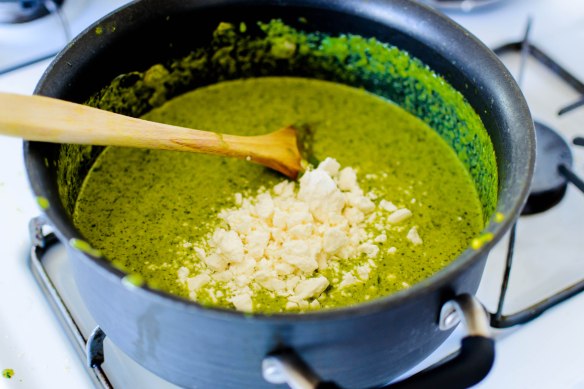 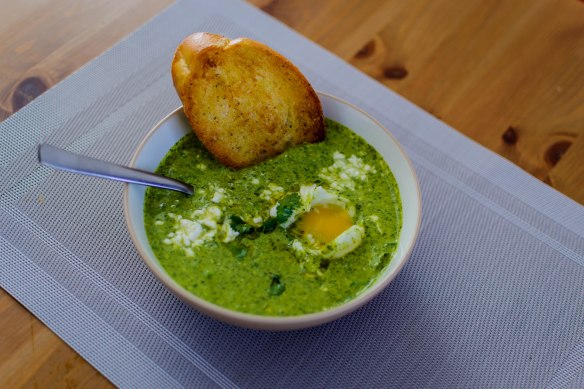 I’ll be spending next weekend arranging my new kitchen, so I’ll see you when I can. Be well!

Adapted from Ottolenghi’s column in The Guardian

1 cup each baby spinach and baby arugula leaves, or 2 cups baby spinach (Ottolenghi gives his quantities in grams, and I admit I should have weighed mine, but the food scale is packed, so I estimated)

squeeze of lemon juice to taste, if desired

Garlic toast, if desired, to accompany

Sometimes this is called Indian Summer.  I like to think of it as Swing Season.

Two Bittmans for you this week. 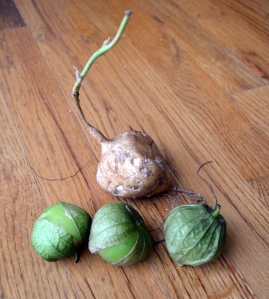 This sounded like a good late summer/early fall salad.  I found tomatillos at the grocery store, but no jicama, no daikon, and no kohlrabi.  And then we went to our Farmers’ Market, and I found all three!  Huge daikons, alien baseball sized kohlrabis and, hidden between stacks of beets and the tiniest fingerling potatoes I’ve ever seen, a pile of grubby little tubers with vine-y stems still attached.  Eureka, jicama!  Back at home, I assembled the troops:

(really, the number of jicama and tomatillos isn’t super important as long as the quantities are roughly equal once you’ve cut them up.  Start with maybe 1 cup of each, see what you think, and then add more if that’s what makes you happy)

I’ve tasted jicama, but it has been a long time.  And I’ve certainly had tomatillos, but mostly only after they were roasted and processed into salsa.  I wasn’t sure how they would be raw.  This – a lovely fresh slaw/salsa/salad hybrid – sounded so bright and tart and lovely that I wasn’t too nervous.

Before anything else, I toasted the sesame seeds and set them aside.  They give off such a lovely roasty scent when they are just browned and starting to release some oils.

I peeled, then sliced the jicama into rounds.  Then I stacked up the rounds and made thin slices across until my two little aliens were a pile of matchsticks across my board.  Into the bowl with you. 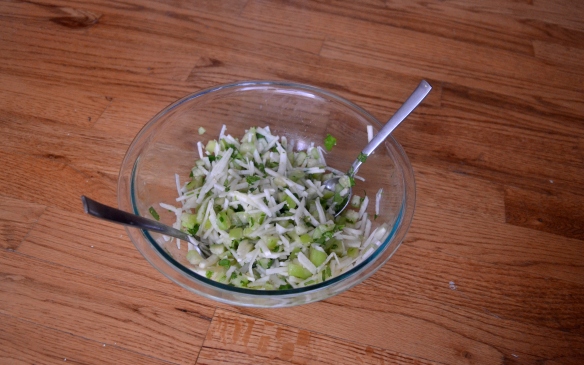 Next I quartered and diced the tomatillo.  Because they are still underripe when green (apparently they can turn purple and get very sweet when they ripen, but I’ve never seen them in that state), their skins were quite resilient – it took some pressure to get my knife through them.  Carefully chunked into miniscule cubes, they joined the white confetti in my bowl.

A quick squeeze of lemon and lime, a whisking pour of olive oil, and a handful of chopped cilantro feathers later, and the dressing was done.  And then a sprinkle of salt, and it was perfect.  It was a little more than needed to moisten the salad, but it’s hard to know how much juice citrus will have secreted away inside it, so it’s always going to be a guessing game.

I mounded the white and green on my plate, then added a generous scoop of Mexican rice and a quartered cheddar cheese quesadilla.  Simple simple.  At this point, you should ideally sprinkle the sesame seeds you so carefully toasted atop the salad, but I forgot until after I’d already subjected it to a photo shoot.

I was surprised and pleased by the flavor of this dish.  I can’t imagine eating it as a Thanksgiving side dish, but it was a bright burst of summer on a day that began in drizzly autumnal terms.  Jicama is crisp and juicy with the barest hint of starchiness, and its flavor reminds me most closely of an Asian pear.  The tomatillos were very tart, but the pairing tamed them.  Imagine a granny smith apple crossed with an underripe tomato and you’re approaching the brightness we experienced.

This was good as a salad, though its tartness necessitates a small portion.  It was also good heaped atop our quesadillas, like a raw salsa.  It contrasted nicely against the melted cheddar and the just crisped corn tortillas.  But where it would really shine, N. and I agreed, would be as a kind of mirepoix for guacamole.  Dicing the jicama instead of leaving it in strips and folding the whole salad gently into chunks of ripe, buttery avocado would make for the perfect chip dip.  Tart, creamy, crunchy, with the right kind of salty sourness from the dressing, and all you’d need was a frosted Corona and a pool to dip your toes into.  Summer. 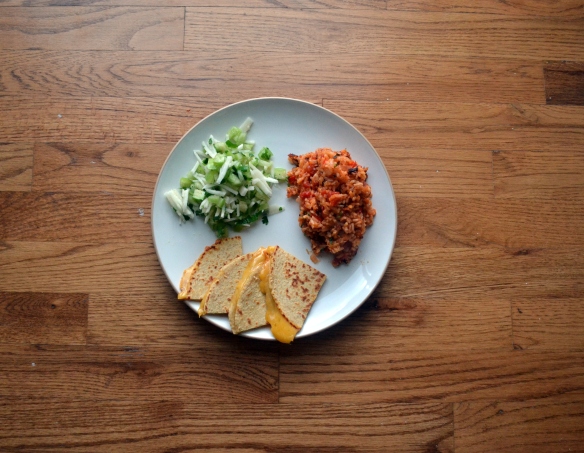 But things never end there.  At least we hope not!  Days of sweating and hiding inside and waiting till after sunset to go out always, inevitably (even if it’s taking FOREVER, Los Angeles…) relax and cool and crystallize into Autumn.

35. Pumpkin-Noodle Kugel: Cook a half-pound of egg noodles in salted water until not quite done; drain and put them into a buttered baking dish. Whisk together 4 cups milk, 4 eggs, 1 cup pureed cooked pumpkin (canned is fine), ¼ cup melted butter and a pinch each of cinnamon and salt. Pour over the noodles and sprinkle with bread crumbs (or, for added kitsch, corn flake crumbs). Bake 45 minutes to an hour, or until a knife inserted into the middle comes out clean.

I had no idea how to serve this dish.  I’ve heard of kugels, but I’ve never even eaten one, let alone made one.  I wasn’t sure, as usual, what to serve it with, so I asked a few friends and did some research on the good ol’ internet.  At the point that I read Smitten Kitchen’s version (okay, so this one is written by her mom, but seriously, that woman has cooked everything, and all of it sounds and looks outrageously delicious), this sounded more like a dessert than a dinner side dish.  It would be, I decided, dessert and weekend breakfast.  Sweet, autumnal, nicely spiced, and custardy.  “It’s going to be like a rice pudding but with noodles.  And pumpkin,” I told N.  He still wasn’t sure. 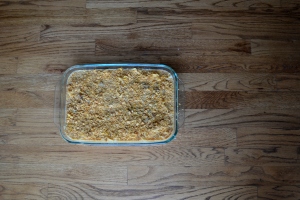 ¼ cup melted butter (I put this in, but I’m not sure it was really necessary)

2 cups corn flakes, well crunched (who am I to pass up added kitsch?!)

It wasn’t until I had collected ingredients that I realized Bittman’s recipe doesn’t call for sugar.  But I was already on the dessert/breakfast kick, and I couldn’t quite envision this as a savory dish, so I dumped in my sugar estimation anyway, along with the golden raisins that aren’t part of the original.

I cooked my noodles for 5 minutes and then let them cool for 10.  They probably needed to be cooked for only 4 minutes, because they keep on cooking not only while they are in the oven, but on the counter as they cool as well. 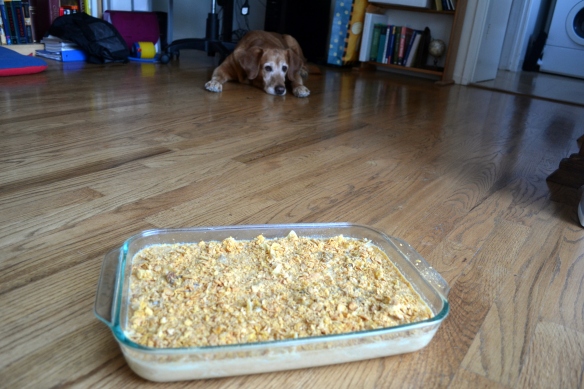 Yes, I take these photos from the floor. But it’s a nice wood floor, and the light is so good, and I promise Lucy stayed on the other side of the room the whole time…

With the custard whisked together and the noodles evenly spread in a buttered 9×13” glass baking dish, I preheated my oven to 375F and assessed the corn flakes situation.  Whenever an ingredient needs to be crushed, crunched, or pulverized on Chopped, I yell at the chefs for using their hands, knives, or a rolling pin instead of just bringing over the food processor.  But they don’t have to wash all the dishes they make, and I do, so my pretty little scarlet processor stayed on its shelf.  I crushed up the cereal with my hands, feeling a kind of satisfaction as the flakes became bits and then powder.  I topped the noodly custard with a generous layer of crumbs and carefully slid it into the oven. 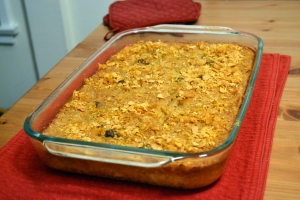 An hour later, the custard had set and the smell flashed me forward to Thanksgiving.  I’m convinced we as a society don’t really know what pumpkin tastes like, because what we experience is texture and spices.  If this kugel didn’t have a sprinkle of cinnamon in it, I’m not sure I would know it had pumpkin either.

Dinner came and went, the kugel cooled a bit, and I dug out a too-big portion for myself, and neglected to feel any kind of remorse about it.  It was too good for that.  The noodles had melded together as the pumpkin infused liquid cooked, making a solid, scoopable, sliceable custard.  The corn flakes on top were perfect: aggressively crunchy against the soft interior.  I wouldn’t omit the golden raisins either; they were a really nice textural contrast to both the softness of the noodles and the crunchy crumbs, and their complex sweetness added some depth to my dessert casserole.  It was warm, and sweet, and perfectly comforting as I tucked my feet under me on the couch and waiting for the approach of Project Runway (don’t judge, every girl needs a little reality TV now and then). 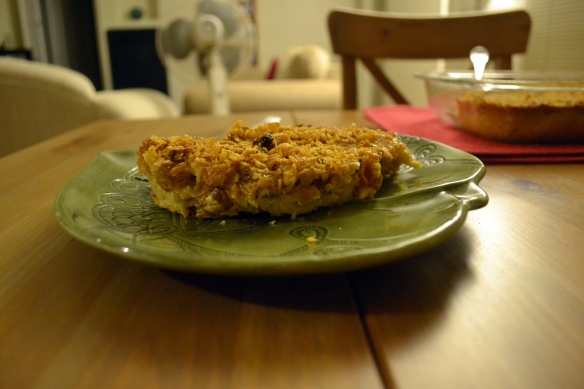 The leftovers are delicious too, though the dish does lose something in relinquishing its crunch to the microwave.  In another universe where I’m a Southern cook, I could see doing crazy things like frying squares of this in butter and then drizzling hot maple syrup over the top.  But I’ll refrain.  Because from my window, I can see my basil wilting beneath the curiously, cruelly hot-for-mid-October sun: back to summer, so it seems!  And here I was considering making soup…